There were many of us, people who work on the BRITICE-CHRONO project, on the boat this summer. But there are so many more! Those who do the fieldwork on land, those who don't do fieldwork but do modelling or AMS dating or whatnot. And all need to be kept in the loop. Once a year there is a big meeting in Buxton where we all report back. Very useful!

This year there is a lot to say; both cruises have been done so there is a lot to talk about. I am involved in 4 of the 8 marine transects. This meant this time I would be expected to talk about all of them, and also about the general state of things. A lot of work! It was good though; it forced me to somehow visualise all the different types of data we have. Seismics, stratigraphy, radiocarbon dates, taxonomy, and all of that spatially distributed. It was a lot of work but I finally got to see the pattern!

It was hard work. And then I received an email from James: more radiocarbon dates came back. And that's good as we had been waiting for them for many months. But it also meant I had to incorporate these too! More work. And the day I received them we were just on our way to Liverpool to have a meeting with the chap who was heavily involved in the terrestrial stuff, so we could align the land and the sea a bit. It's nice to know in advance what the gist is of what people will say! 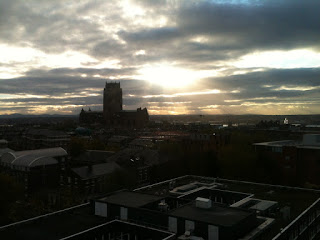 The view from the coffee room in Liverpool

The meeting would start on Monday. I went into the weekend without knowing when I would speak. The presentation on the general status of the marine work had been collaboratively made. I had made sub-presentations for the separate transects, but none of that had been integrated with the other speakers on these topics (generally the transect leaders). I don't go into a meeting that ill-prepared very often! But I suppose from here we can wing it. We have the data. We'll manage! And it will be great to see everyone again!
Posted by Margot at 17:59