Buxton, one year on

Things look better when you look at them together. I work full-time on a research project, or rather; I am being paid to work full-time on a research project and I try to do just that but I sometimes get distracted by teaching. And the annual meeting came up; that's the moment you have to bear all, in a way, but I felt I didn't have enough to show for myself. And I wasn't optimistic about the entire research project. Going to Liverpool had already increased my optimism, but the big annual meeting in Buxton which that was a preparation for would be the real deal. It was hard work to prepare for it but by five-ish on Friday I figured I was sufficiently prepared. That made me feel better! And really prepared I was not, but neither was anybody else; we left without knowing the program. I knew I would be in 4 or 5 talks but I wasn't quite sure for how long or when. Oh well. I had the data; the rest would sort itself.

We drove off on a blustery day. There were three of us; James, who is one of the project bigshots, Catriona, one of our PhD students, and me. I offered to drive as I knew my levels of working hard had been nothing compared to James', lately. I think I did the right thing; James slept pretty much all the way to Stockport. And in spite of strong wind and low visibility we arrived without incident. Time to greet people!

There were people who had been on the first cruise, or the second, or both; and there were people I only knew from meetings like this but who I had learned to quite appreciate anyway. So many people to hug and to ask about how they had been! It was a bit of a child-in-the-toy-shop feeling. It's a lovely bunch of people. And then there was lunch.

After lunch the talks started. And so much had been done since the previous meeting! So much more had we learned about the research question! It was good to see. If it's just you in a lab you don't see the progress. If everybody comes together you do. 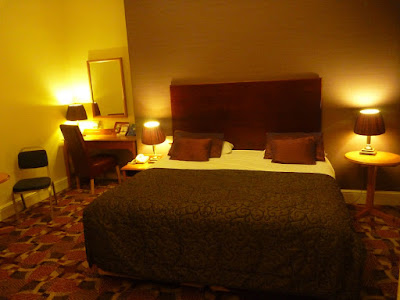 My very posh hotel room, the only space I took a picture off. Too much to do!

We had talks until about six. I was one of the first to speak. And the last! And what I presented was a bit rough and ready but it was appreciated. And then the drink came out. Important too! The socialising which had started over lunch and during the tea breaks continued at a higher pace. It was nice! And useful. The radiocarbon folk wanted old material for extra calibration, a Canadian who interprets the Celtic Sea in a completely different way from what we tend to do in Bangor was keen on discussing some of my talk; I had been presenting the results from our MSc student who had not been able to be there himself, and all his results pointed squarely away from the Canadian's hypotheses. We were struggling to find a place to do our X-rays and were hoping someone would have ideas.

Soon it was time for dinner. It was nice! And then we were back in the main room for more socialising. And during all that we got to see some of the pics the cruise photographer had made, although most had already been available to those present on board.What I expected to happen happeend; it got late and alcoholic. At some point I figured I had had enough but then our deer-eyed Italian offered me a Laphroaig. Of course I couldn't resist. And for me, the evening ended after telling some nationality jokes with an Irishman and the aforementioned Canadian.

The next morning we continued where we had left off. I know one may suspect influence of the whisky was at play here, which I deny, but during the later talks I did get a bit tired of the endless summing-up of dates. Oh well! I sprang into action a few times more. I think everybody now knows where things stand, and if they have any further questions they know where to find me. And then the meeting was over. Time to hug everybody again! And head home.

I knew I would be chomping at the bit to move forward with this project. But I also knew in Bangor a pile of marking awaited, and an upcoming workshop, and a practical course I had to teach on, and an MSc student who needed guidance, and some students who needed a good talking to as they had behaved in an undesirable way... I may be rearing to go but I wouldn't do an awful lot of going! Maybe the week after. Let's hope the magic of the annual meeting lasts that long...