Soon the theatre/cinema/general arty building in Bangor will open. They are already so open they show people around, but these people still see ceiling being painted and last chores being finished. I hope to go there early next month for a movie. But until then, the obvious places to go to for culture around here are either Holyhead for its cinema, Caernarfon for its cultural centre and Llandudno for both its cinema and its theatre. I hadn't been to any of these! I am rather busy as it is, and I don't really have a stack of friends to go to theatres and cinemas with (although it does happen) so my cultural life leans heavily on books.

Enter Marjan. She wanted to see a comedian in Llandudno, but the usual suspect (Jaco) didn't want to go. Would I? Of course! She booked it in summer. We'd go in November. And now the day had come! So which comedian would this be? It was Nina Conti, about whom I had seen a documentary, who I had seen on QI, and who I had heard on the radio (which proves she's not just a ventriloquist). She is good. And I looked forward to a night out with Marjan too!

We drove through the heavy winds to Llandudno, had a nice dinner in a restaurant, and went to the theatre. When we got in the venue was already packed! Blimey! That for a ventriloquist. She came on with a large handbag; this turned out to host her frequent sidekick monkey. They exchanged a lot of witticisms in which they mocked their own act ("Hello Lan... Landud.. eh..." "You just can't say that name" "No, and therefore neither can you"), and they didn't waste time starting to interrogate people on the front row and doing the usual comedian spiel. They also did a song. But her main act these days is putting masks on people and animating these with a little hand pump. When their mouths move she does the talking, taking advantage of the masked people's helplessness to make them say things such as that they play the guitar, and would love to do a song. And one of the people on the front row, which she had had a chat with, was the first victim. He managed the treatment well.

She was only getting started. She got one of the man's companions on too. Then she hid in a bag, with the monkey on top, and had him play the audience. This act makes the ventriloquism easy but it's hard to play an audience you can't see. But when she came out again she asked the people who had been proactive with the monkey on stage. At one point she had six people there. As she has only two hands it lead to people having to operate their own pump, or that of the person beside them. The clumsy, untrained timing of the mouth movements even added to the act.

She had me laughing out loud many times. A good night out! I was just a bit disappointing she ended in a rather silly way; she changed into a back-to-front nude suit and put a mask on the back of her own hand. This to me was a bit too much drunken students' humour and not on the same level as the ruthless manipulation of her audience earlier on. But I suppose maybe other people liked it. Then she was off. 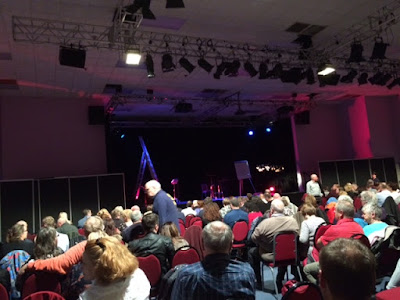 The hall during the break. I suppose taking pictures of the show would be hard, rude and a breach of copyright!

That left us to drive back through the by now even heavier winds. Marjan invited me in for a cup of tea and a look at the programme of our own, soon-to-be-opened theatre. She had done one of these guided tours, so she was well-informed. We immediately agreed on seeing a film together rather soon. I might get cultural again!
Posted by Margot at 09:21