The previous time we'd done this trip it had taken us forever, but this time, Phil was keen to do it fast. My idea! I was slightly under the weather and going fast means being home early (unless things go wrong further down the line). I like! So we ran up the hill, Edwyn rigged the pitch in a jiffy, and one after the other we dropped the first pitch, while Edwyn already rigged the second. We were rolling! 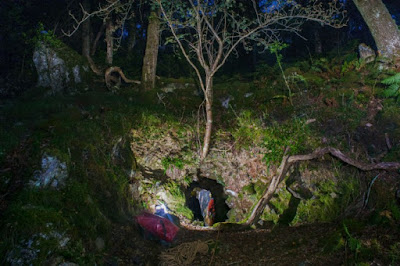 The entrance; a picture from the previous trip by David

It took slightly longer to get the two newbies down; they had never done anything like this and the first pitch is a bit awkward to get onto. But they did it! The chap even whooping with joy. He'll be back, I'm sure.

The second pitch is a lot more comfortable. Soon most of us were down. I knew David had brought some polyprop rope to fix a handline down a precarious bit we thought connected up to some bit where we had tried to climb up the year before. I was curious to see how that would end! But he was the last man down, so I did some scampering first. At some point I found the newbies near some dig, suggesting they supposed they weren't allowed to go there? I was surprised by the suggestion; not allowed? Not very often-heard words underground. We checked it out ! No idea who had been digging but it looked promising. And a long term plan...

Then finally David appeared. He had started rigging the polyprop rope, but it was too short, so we rigged a climbing rope too, for now. He was a bit nervous about the whole enterprise; this potential route was festooned with lots of loose stuff that could come down any second. But it looked like it went! Soon he could see the top of where we had already been. And the climbing rope was just long enough to get there. I went first, heavily photographed, and made it down without having too much stuff on my head. Soon David followed in similar style. Edwyn had stayed on top of the pitch; he would take the rope with him, and go out the dry way, while we would continue the wet way. Everyone happy! 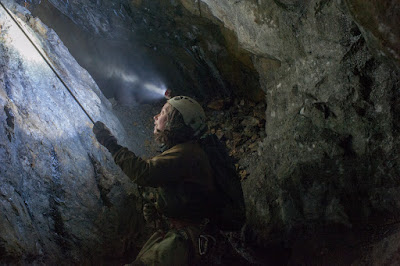 Me in the new passage. Pic by David


We had some cake afterwards (we had Mick, after all), and then we went home. I got there around 11PM; unprecedented! We should do that more often; rapid trips with enthusiastic newbies and new territory! But I won't hold my breath... 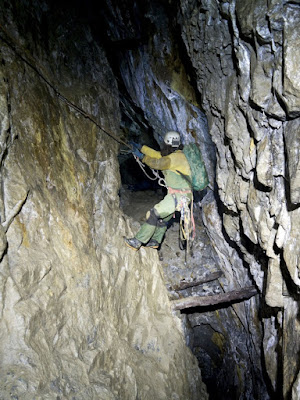 Me on the traverse; a picture from the previous trip by Simon
Posted by Margot at 08:42