We go into Cwmorthin, the mine which is the venue for most of the activities of Go Below, very often. It's a huge pace, and you can go countless many times and still see new bits. But Go Below owns at least one more mine, Rhiwbach, and most of us hadn't been there. We had wanted to go a while ago, but hadn't managed to get our hands on the code of the lock. And this week we would initially do something else, but we needed Phil for that and he couldn't come, so we would give Rhiwbach another go. It was a dark and stormy night!

While we drove past Llyn Ogwen I casually mentioned to David, who had been after the code the time before, that I assumed he had been successful in the meantime. He jumped. And said he had bt had forgot to bring it! Oh dear, now what. He had had the code mailed to him, and he can read mail on his phone, but had left it at home. And one can do a remote log-in via someone else's phone, of course, but that requires signal. Did I mention we we driving down a largely empty valley in Snowdonia?

Paul, who wasn't driving and did have his phone on him, tried phoning some of the others too, who might know. No success! Maybe we would have to abandon Rhiwbach after all. But Paul had an idea. Miles, the founder/owner of Go Below, lived along the route. Maybe we could just knock on his door? It was worth the try. And it worked! He must have been mildly surprised to find three dripping mine explorers on his doorstep, but he didn't blink and just gave us the code. We were go!

We found the others and quickly got changed. And we walked up the hill to the entrance. It was an unusual walk. The horizontal rain drove us on over the slate waste and through the eerie woods. It was very atmospheric! And after a while we reached the gate. Success!

As it was Guy Fawkes' day Paul had decided to be lit by his carbide lamp. I thought that sounded cool and had brought mine too. I had preferred to light it inside; I figured lighting it in horizontal rain would be asking for trouble. So I lit it, but realised it's a bit of a useless exercise if everybody else as powerful modern lights. I stuck with it anyway, just for the heck. Until I was admiring a flooded chamber and noticed the flame wasn't only coming out of the nozzle, but also out of the sides. Oh dear! What to do? It's carbide; you can't extinguish that with water. I just put it down to contemplate the situation. Someone suggested blowing it out. I din't think you could, but lo and behold: you can! I now had a sooty and hot lamp. Oh well. It would cool down. 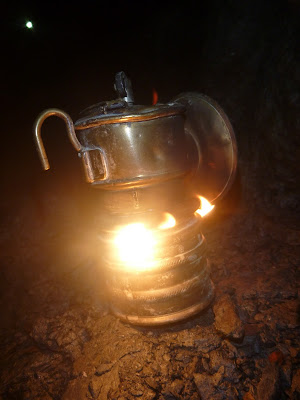 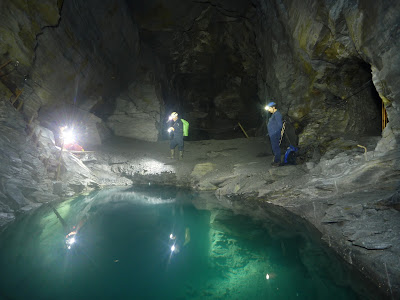 One of the flooded bits 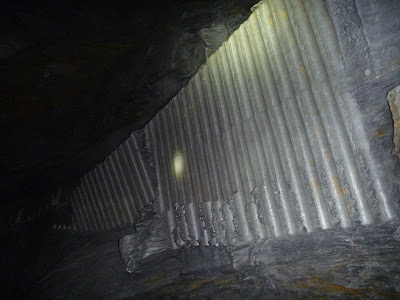 
I just held on to the lamp while we explored. This place had nice blue flooded chambers and interesting traverses. It also had some artifacts left. And there were ropes around (thanks to Go Below) that especially Edwyn and me eyed with desire. We'll have to go back some day with full kit.
We also found some strange stitch drilling we didn't understand. It looked good though!

At some point we were watching a rope that was dangling down a waterfall. Can I resist? Of course not! I was already wet up to the sternum due to a look into flooded chamber so I had little to lose, and I like clambery things. I came down that way too, because I could. Then we headed up further towards the exit. We came past an air shaft. You could go out that way! And it was getting late, I was keen to do just that. Some of us did while Paul led the rest through the more conventional exit. That was the most impressively gated entrance I think I've ever seen (we came past it around the outside)! Blimey. Too big to take a picture of, though.

We made our way back to the cars; quite a walk. I knew I couldn't leave until David and Paul had had cake but once they had had two pieces each we set off. I want to go back there! So much water and quite some ropes to have fun with! Let's hope Miles doesn't change the code...
Posted by Margot at 09:38