One of my new year's resolution had been to get a new phone. Sorted! I also had intended to get rid of my bulky music collection and restrict myself to digital music. But that takes a rather large receptacle for all this music. My small old iPod couldn't possibly to it. I didn't want to use my laptop for it, nor a phone. I just wanted to have a thing in my cupboard that played music and stayed there. I figured there should be specific items for this cause. I had been looking at these for years but they didn't seem to exist. Not the way I imagined them, anyway. I pictured a sort of CD-player-shaped thing with a huge internal memory and a display that shows you what music there is and which has functions for selecting it in various ways. But I think I think too old-fashioned! These days, you either use your laptop, phone or iPod. I had to do a rethink. And settled for the option of buying a large iPod, big enough for all my current music. If that would ever fill up I'd deal with that then.

I bought the iPod. In late May. And then I had to figure out how to actually sort out how to play that on my stereo. The old iPod had a docking station and that worked a treat. I assumed you could play a newer model on the same dock, provided you added an adapter gadget (like this). I bought one. It didn't work. I scratched my head. Slowly the steam-powered cog wheels in my head started to turn. Wait. What about plugging the whole thing straight into the stereo? That worked! I was very glad. Blimey am I getting old?

I had sorted the technicalities out, but not yet the practicalities. It's not very user-friendly to have the iPod lying down on a shelf. Would I find a way of making it stand upright? It had this rather impractical plug in its backside. I pondered a bit. Make a solution myself? Better not; other people can do that more efficiently. I found a little tripod online that was specially designed tohold phones and iPods. It surely would be high enough form the ground to accommodate the plug! And it was delivered in no time.

The whole construction has to tilt a bit in order to have its centre of gravity in a sensible place, but beside that, the solution works a treat. I should go on where I had left off in making sure all my CDs are digitized and added to the ipod! Then I can finally get to the final stage: getting rid of the CDs! The important thing is to do that before I move house again... 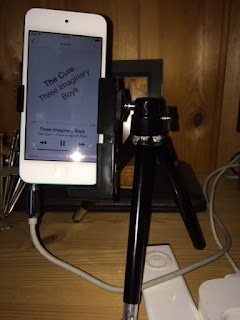