I suppose I have been moaning about the Welsh not being particularly keen to speak Welsh to learners. And I may have mentioned how hard it is to get back to Welsh once people have laughed at you. Both factors combined resulted in me pretty much only speaking Welsh to either Welsh tutors or fellow learners. Well, things are changing; due to a combination of me finding new routes through society, my confidence growing, my colleagues being nice and a healthy dose of luck, I have increased my pool of people to speak Welsh with considerably lately! And it feels good!

It started with me talking languages at a coffee break with one of our technicians. I came out as a Welsh learner, and at the end of the conversation, I asked if we could converse in Welsh next time. And he said we could! And he has not addressed me in any other language since, whenever it was just us! in the company of non-Welsh-speakers this may be considered impolite so then he might, but I'm really glad he's being supportive.

I then found the courage to confront one of he other technicians who had immediately switched back to English when I had tried to establish a conversation in Welsh before. That had rather discouraged me. And now I had success! One more down, half a million to go! And then I bumped into our Welsh-speaking PhD student at the hat party. I'm making progress! One of these days I'll overcome my fear of speaking Welsh to David and then I'm really rolling!

From David the step to caving is small of course; he straddles both worlds. Underground I have Phil to talk with in Welsh. And lots of other people within the group also speak Welsh but generally not with me; probably out of habit. But once I manage to include David maybe a critical mass will have been reached! Watch this space!

And then there also is the internet. Two sites have moved my efforts along. One is saysomethingin, which is a language learning site that happens to have Welsh (and Dutch! And Cornish! And more!), and which is very popular among Welsh learners. It has a page designed to bring learners and fluent speakers together. I thought that was spiffing and mailed a woman who lived nearby. We got mailing and she agreed to meet up. But she told me to phone her to decide on where and when - eeek! Phone her! In Welsh! That's scary! I postponed for a while. But then I finally gathered enough courage. She didn't answer - that was relief, actually. But she phoned me back. I had my first Welsh phone conversation and it worked! The line wasn't good but we understood each other! And we are both busy and haven't managed to actually meet up yet, but contact has been established and I trust we will meet up later on.

And then there's clecs, the Welsh social media site. Twitter in Welsh, in a way. It's really the small-town variety with smalltalk and cute cats and people being nice to each other and suchlike.But it's a place where people get to know you in Welsh, so they'd naturally address you in that language if they'd meet you. One lady, Nora, is very active on it. She once posted a picture of a page in a 19th century book she had. I loved it! And I mentioned I have a grammar book of a comparable age. She said we should meet up over coffee! My idea. So we did!

She was great! We chatted for almost two hours. And she's a veritable language warrior. She insists on being served in Welsh in shops and such. And gives shop managers a hard time if they can't provide! You go girl! Of course she was a Welsh tutor - I suspected as such. So in a sense I haven't moved beyond the usual suspects with her, but it was good anyway! I think we'll do that again! 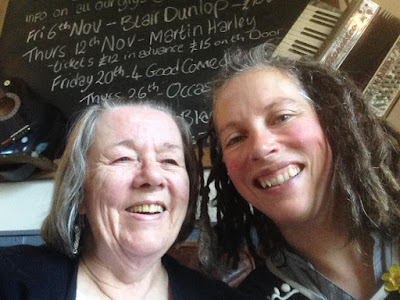