When I lecture the second year students, I struggle to get a response. When I got a chance to lecture to the MSc students, a lot more came out. So I wasn't quite sure of what to expect with some 100 first year students. I would have to help out on three practicals with pretty much the same students every time. I figured they'd rather hide under the desks, but then again, it was a practical. They can't really!

It all started with a session in which the students do some basic stratigraphy and palaeontology exercises. Nice; right up my street! And you don't get to sit still very much; the students need lots of help. Sometimes they need perhaps a bit too much; they could sometimes first just think logically before they go and ask someone, but on the other hand, it's nice and interactive. The questions are easy, and it's easy to steer the students towards an answer. Sometimes it just needs some rewording, or some reassurance something isn't a trick question. Or maybe just the explanation of a word. And you get to see many, many pennies drop in the course of the three hours. I enjoyed it! And the second session was fun too. 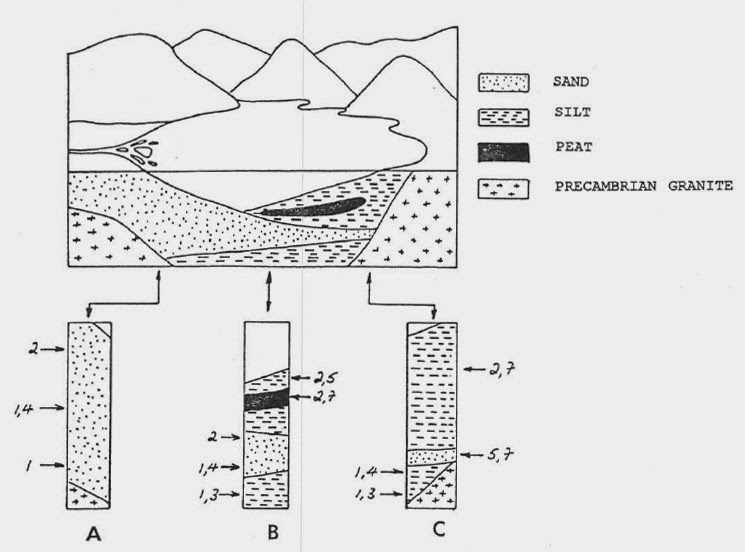 A figure taken from the practical

The other practical was hydrological, and that was a similar case of students being intimidated by in themselves rather simple questions. And here there was some calculating of things such as river discharge or flow speed and such things. And most of the students don't see these things a anything other than numbers on a piece of paper, which they can calculate if someone gives them a formula. Wondering themselves what these numbers mean and how they relate to each other is largely beyond them. I tried to make them see it, rather than just give equations. I think I did rather well! It was very gratifying. Soon I'll get these students to lecture to; I hope I can make them see what I mean then too, when it's just me in front of a screen!
Posted by Margot at 11:41