What do you do if you're a runner and you move to a new place? You look for runs! And in York I had started to run Parkruns, which was fun. For who forgot: Parkruns are free, timed, weekly 5k races, run on Saturday morning, in countless many places in the UK. But Bangor didn’t have a Parkrun. I found other runs, but the fun about Parkrun is that is just is there. If you are busy and you don’t get around to searching for races you can always do that one. But not here.

But the Parkrun concept is still growing. And soon I heard rumours about it coming to town! And so it was. As a venue, Penrhyn Castle had been chosen. It’s a bit out of town, but still only half an hour away on bike. Feasible! And the castle also gave the franchise a name; Bangor in Northern Ireland already had a Parkrun, so the name was taken. Ours is Penrhyn Parkrun!

I got up earliesh, and mounted my bike. I got to the outer gate of the estate. So far so good! And then the castle didn’t materialise. Oh dear! Would I be late? It should just have been straight ahead! But there was a closed gate there. With a “go away” sign. I thought of the Awyr Las race at Plas Newydd; I got there by lifting my bike over a gate and staggering over a cattle grid. Maybe this was a good strategy here too!

Seconds after scaling the gate I saw the turrets appear. I found it! Next time I might try a different route. But now I could park my bike, take off my outer trousers, put on my running jacket and get to the start. The castle had been described to me as a monstrosity, but I liked it! If you do kitsch, then do it properly! 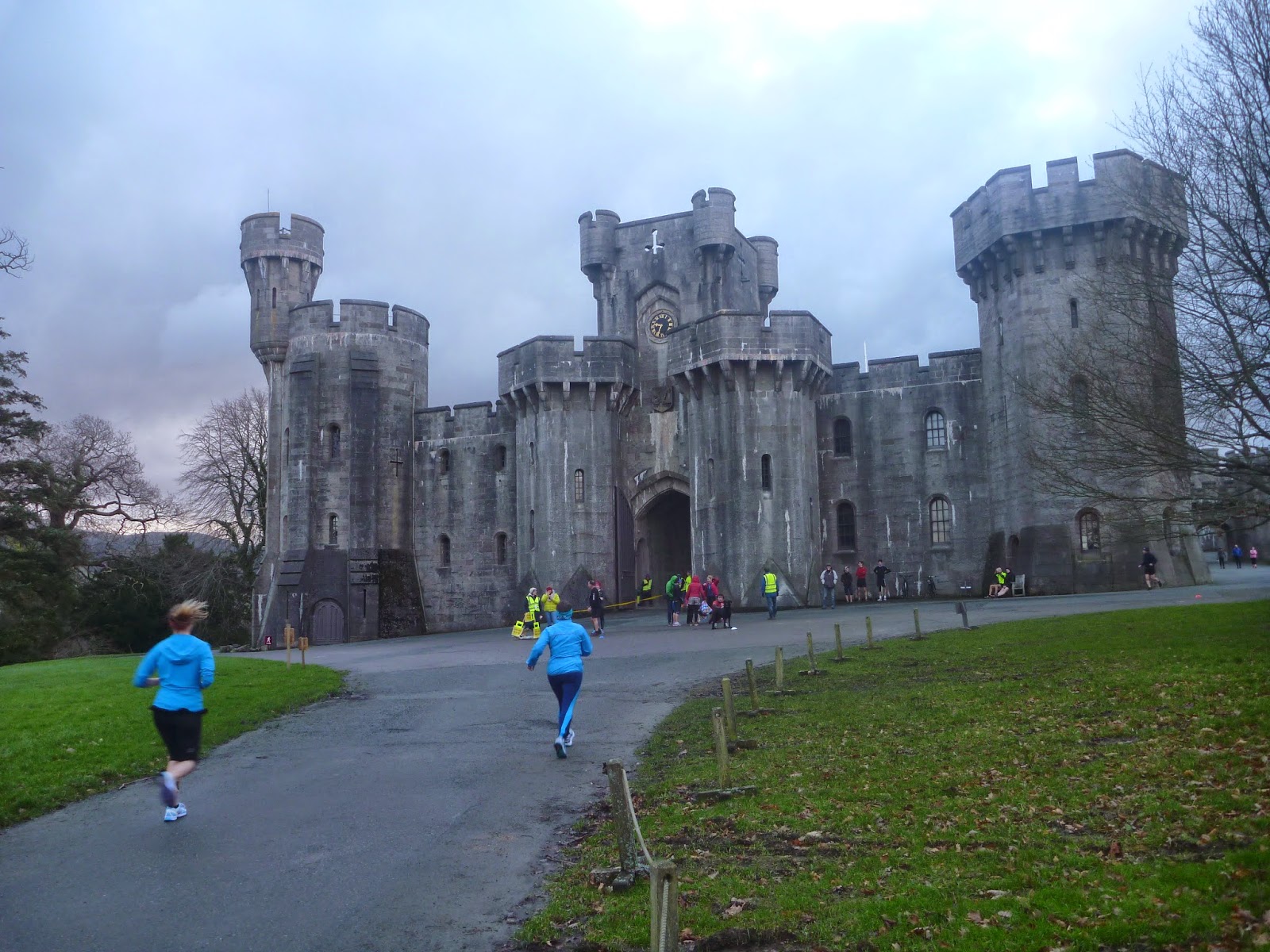 Heading for the finish - inside the gate

We got a small intro on the route, and then we were off. It was a nicely small group! In York there would be 300-ish runners; here there were less than 100. Maybe because the run was newer, but maybe Bangor just doesn’t produce that many runners. It’s a small town, after all.

The route was nice. Through the castle grounds, past impressive trees and well-kempt lawns, and sometimes with view on the mountains and sometimes views over the sea. Nice! I was running rather pleasantly. And I saw I was actually going to run a decent time, in spite of the up-and-down which York doesn’t have. I later saw I had run in 24 minutes sharp; not bad! Maybe under 24 minutes next time! I think I want to come back here. It’s a nice way to start the weekend!
Posted by Margot at 09:09