Rendez-vous with the CMEC

If you live in North Wales, all underground-minded people come to visit you! Or rather, they all visit your region. In less than a year I had already enjoyed the Plymouth and the York cavers travelling to my neck of the woods. Excellent! But it didn't stop there; one day I got a message from one of the Cornish chaps that two of them would be coming up. Great! They had been there during my first joint Devonian-Cornish trip almost five years ago. And on many of the amazing trips I did with the CMEC. And now they were here!

They suggested we go down Pandora on Saturday morning. So I turned into the parking lot which was deserted except for a large white van. Which spewed out blokes in red furry suits! It was good to see them again. I suggested a a snazzy plot with our respective vehicles; if we would have one at each end, it would limit the amount of time we'd have to spend scampering around conspicuously. The local farmers aren't always keen on cavers, even though the entrances are not on their land. So we did! And then our task was to find the entrance.

I had come in from the top only once; during my first trip as a Welsh resident. In my mind it was hundreds of years ago! Fortunately, David had refreshed my memory a bit. And it helped! It wasn't me who found it in the end, but never mind. We got there! And rigged it. We decided to leave the rope there in case we wouldn't find the way out. We had another rope with us for the second pitch! And the third pitch isn't necessary; you can walk around and descend along a fixed handline. So we got in, got to the second pitch, rigged it as a pull-through, and went down. And didn't manage to get the rope down! Which wasn't a big deal; we could climb back up, re-rig it, and try again, but as we knew we din't really need the rope anymore, and it was close to the entrance, we could just leave it and retrieve it at the end. So we ventured on!

We scampered off in all sorts of directions. It isn't an exceptionally big place, but there is a fair amount to see! The men were impressed; there was more than they had imagined. I suppose they just wanted to have a look as they had never been in.

I brought them to the suspended car, and Mike then accidentally found the way on. I had forgot! Good to have these men. We first went all the way down that level until we reached the adit and/or shaft where the entrances had been blocked by rubbish. Then we headed for the way out. We found it without issues! And Darryll managed to fall in love with a clack valve along the way. 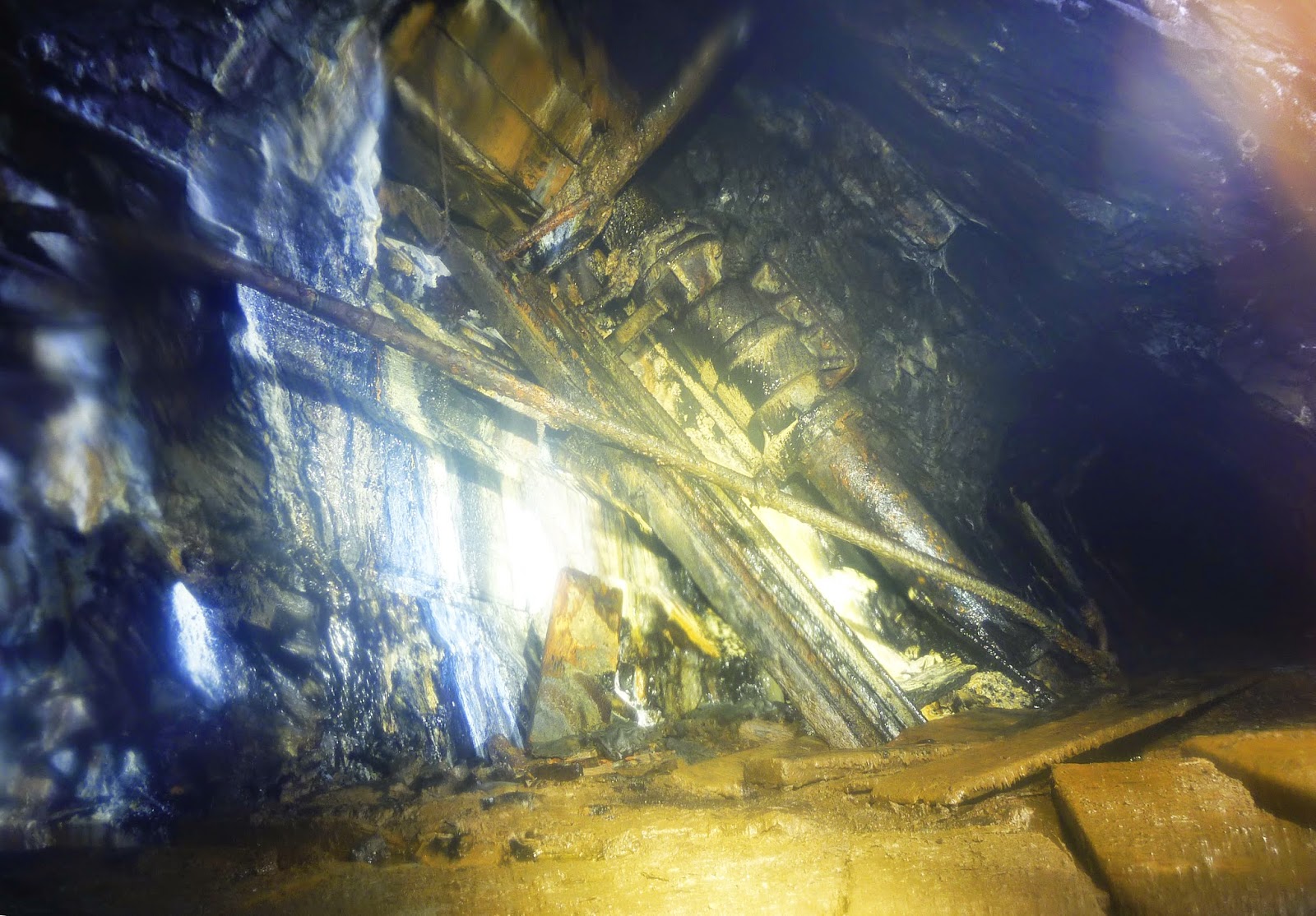 The chunky bit in the big pipe is the clack valve

We came out fairly early. I was glad we had left a vehicle behind! We jumped in, got to the shaft, took the ropes out, and changed into nice dry kit. It was even a sunny day! But time had come to say goodbye. I hope next time there won't be such a long time between seeing these chaps!
Posted by Margot at 12:56