Bake a cylindrical bun. Cut it in two horizontally, so you have two thinner cylinders. Bake them again so they become bone dry and crumbly. Then smear butter on top and add aniseeds covered in white and blue sugary icing and serve these. As the doubly baked buns crumble you end up with hungry guests and crumbles and aniseeds all over the floor. That’s what every soundly thinking new father of a son would do, wouldn’t it? At least in the Netherlands.

Roland is the proud new father of a baby son, but he’s been living in England so long he didn’t bother with food that will reduce people to cookie monster regarding uptake efficiency. He did the UK thing: he invited his colleagues for “wetting the baby’s head”; this is the much more pragmatic tradition of just leaving new mother and kid where they are, and going to the pub to raise glasses on the new world citizen. 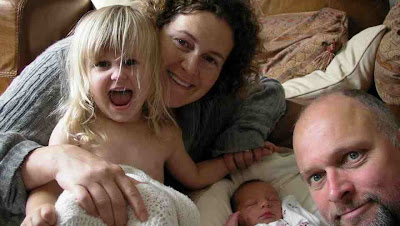 The splendid now complete family.
Jon, Jamie and me ventured north, and indeed, soon the proud father of young Aart showed up, and glasses were raised and gifts exchanged. But we got a bonus: a few pints on we were ready to leave, and Roland decided to phone Maria to find out if we could, after having wet it, actually observe the baby’s head. And we could! So soon we were admiring the serene little 5 days old chap, dozing off on his mother’s chest. A young chap worthy of having glasses raised to! I hope he’ll have a splendid life.
Posted by Margot at 21:59