Geographical running had turned into a nice routine. Pete, Will and I would just plod along our standard route, needing 32 minutes to complete the 6km run. And all was well.

There was trouble on the way. One fateful day saw both the return of Jon and the debut of Hugh, and all would change. Suddenly the air was thick with competitiveness and ambition. And the smell of sweat; even worse than normal. And it all ended in a lethal end sprint, initiated (of course!) by our debutant. Pete is way too wise to be lured into such nonsense, but Jon and me aren’t, so in no time there were three heavily panting scholars amassed at the door of the office building. Hugh left us behind, but he had to pay for that with a cracked heel. Jon claimed he paid with a burst blood vessel in his eye… these competitive males must suffer for their silliness!

Our time, though, had been just under 31 minutes. A record! And we had run without Tornado Blake, so as soon as he heard of this his stormy pride was hurt. He had to equal that time.

The next time he could run only I was available as a sidekick. We ran, and lo and behold: under 31! It was now 1-1 for the two watery men who weren’t willing to yield to each other. That had to be settled.

The showdown came on an unusual day. Chris the Planner was back, and we greeted a keen new member of staff; Alison, who admirably joined us after less than a week on the job. Which was not just a debut for her, but also the first time I had to share my sweaty men! But it’s a pleasure. 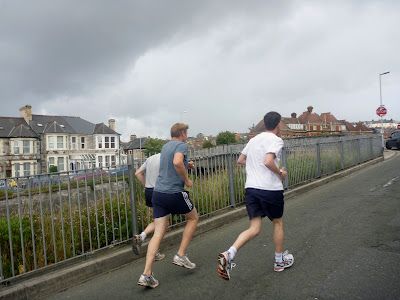 Brave runners under a leaden sky 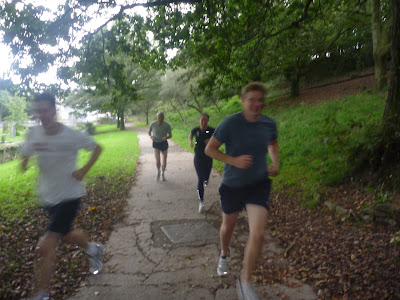 Too fast to be photographed! Fltr: Hugh "the Australian Whippet", Chris the Planner, Alison "too new to have an epithet", and "Tornado" Blake

Such a large group, with various speeds, makes a show-down difficult. There was an end sprint, won (of course) by Hugh, who now thinks the matter is settled. I’m not so sure. The Plymouth Half Marathon might have to give the final answer! But for now I hope the rising numbers of geographical runners are not a blip, but a real trend, and that not only we’ll run with many before lunch, but that next race I run I’ll have some colleagues to accompany me!
Posted by Margot at 17:51