More animals on the road than runners in the woods

During the week I run with colleagues. In the weekend I run alone. Unless there is a race. Or perhaps, unless there are other people keen for a nice, not too far away run. Such as runners of a club. Perhaps even an off-road running club. Such as had organised the Autumn Trail Run! I found out my diary was empty on the nearest day they’d have a club run, so I mailed them for information, and decided to show up. In my new off-road running shoes! 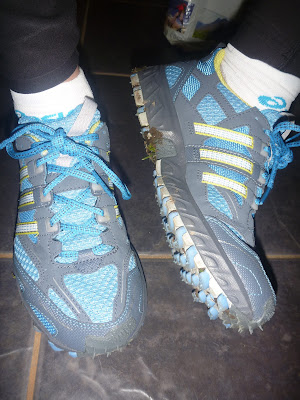 My new toys!
On a beautiful evening I drove to Milton Combe, where we would meet. And just out of town a traffic sign came to life; two deer dashed over the street, just in front of my wheels! A mother and a child, by the looks of it. Nice.

I came to Milton Combe and there was no runner in sight. No problem; I was early. And the village is very charming. But near 7 there still was nobody. Nor at 7. Or just after. Something must have gone wrong! Was it the place, was it the time? No way of knowing. But I figured that hanging around in the village wouldn’t get me anywhere, so I decided to go on a short dark solo run. The old air field was nearby! 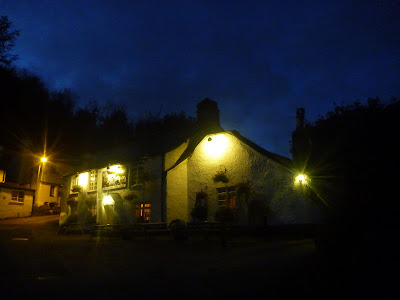 The pub where I thought - perhaps erroneously - we'd meet.
I had a headlight with me, so that it was dark by then wasn’t necessarily a problem. Except that you can’t really see depth with such a beam. And I’m not overly keen on twisting my ankles. So I kept it short! And there were dodgy people around... 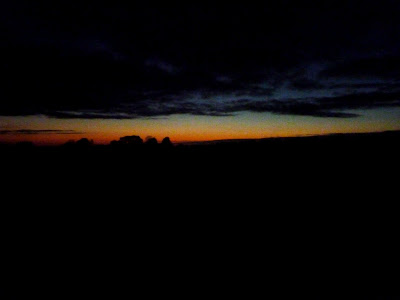 All the light that was left at the old airfield
When I tried to drive away I had to wait for some cocky horses on the road; in anticipation of the runners going off-road, the animals had taken over the tarmac! Even though I hadn’t found any runners anywhere among the trees... Maybe next time I’ll be more successful!
Posted by Margot at 21:17