Sometimes you wake up with that feeling something’s wrong. A logical thing to do is switching on the light. But then it might not work. And perhaps the next light switch doesn’t respond either. Nor the next. Nor the next.

If that happens to me it tends to mean I’m actually still dreaming. Though it could just mean a power failure. But recently I had a smaller scale version of such events: I broke the light switch in the bathroom. Annoying!

A few days later I opened it up and had a look. It looked fine to me! When I screwed everything back in place it worked again. Once. Time to buy a new switch.

There’s a lot going on, and it was after more than two weeks of showering with the door open and the light in the corridor on (the bathroom doesn’t have windows) I managed to put the new switch in place. An annoying job, as standing either on the bath, or on the little ladder that lives in the cupboard in the staircase, I can only just reach it. But I managed! And just in time; a few days from now I’ll have no fewer than five friends visiting. And they are well able to do what needs to be done in the dark or by candlelight, but that does hardly classify as practical… 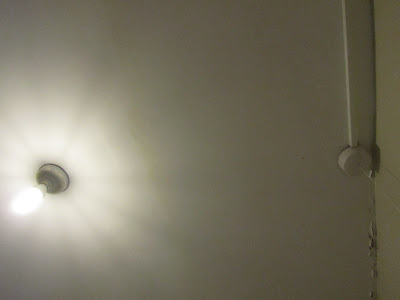