I already have a book! Would that sentence have the same ring to it in English as it does in Dutch? Anyway. I’ve already seen Baker’s pit! The statement makes about as much sense. I’d been in Baker’s four times already, but it’s a big place, and every time I go in there I see new bits. So when I figured it was time to venture underground again, and the venue was Baker’s, I thought that would be fine. And it was. And when you go down anyway, you might as well do it properly, and go as deep down as it gets.


We were a rather large group, but we moved fast enough to cover quite some ground. After about 5 minutes I already was on unfamiliar terrain. And Rupert, who was leading us, suggested we go straight into the bowels of the cavern. We expected a lake there, and the longest permanent underground waterfall in Devon, or something like that. So we went for it. 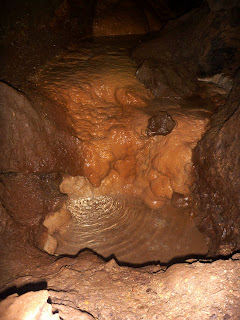 A random pretty water feature in Baker's
Skip, one of our members originating in the Devon Speleological Society, found the, well, lake bed. It had been raining outside, but there was no sign of the lake! Just a water line on the dry rock. So after a quick look we went back; now heading in the direction of the waterfall. And its description doesn’t feature the word “permanent” for nothing, so indeed, this water body didn’t disappoint us. Though it’s a very modest drip, and is burdened by the big word “waterfall”. I was glad to have seen it, though! Due to work I don’t venture underground too often these days, but I was glad I’d come out. There is, after all, nothing like slithering and clambering around underground after a long working week! 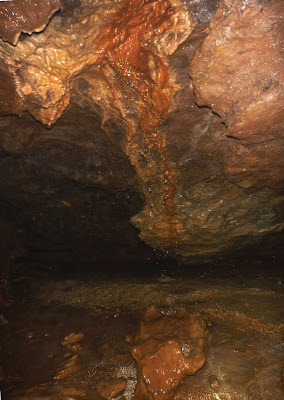 Click on the pic to enlarge it, so you can see the actual water! This, my dears, is the waterfall. 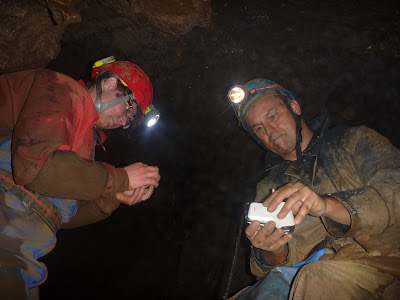 Stuart wants to take a pic too, but needs to change memory cards first, helped by Beth 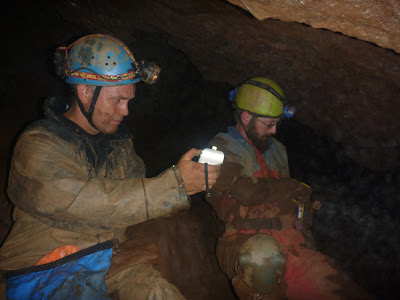 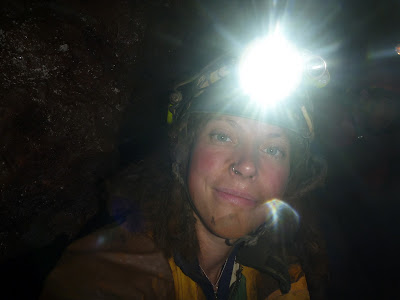