There are these moments when you find something on internet, and you feel the hours be drained from your life. I had one of these moments when I found the website of one of the regional running clubs which has a run diary on it. All runs in Devon and Cornwall in a neat list! One can just pick and choose! I felt like a child in the candy store. I found the Saltram 10k there. And I also found a nice muddy-sounding race. Eight miles through a park I’d never visited. But it sounded splendid! Lots of muddy, bumpy tracks with stinging nettles and protruding roots, and no fewer than 4 river crossings. Sounded like fun! As much as it did I failed again to attract any friends to this run, but that didn’t stop me.
I got to the venue and I soon had what I by now consider my standard racing grin on my face. Somehow the atmosphere at such events does that to me. I also found the chap that also works at Plymouth University, and who was the only familiar face at the Totnes 10k. And I ended up chatting with a guy who turned out to be a member of the organising club, who immediately tried to recruit me for the club in question. They go off the road all the time!

At 11AM we started, in the drizzle. I thought of Neil, who would, at that very same moment, be starting his marathon. That's quite a different league! My race was more play than anything else. And it started modest; on grass. But soon we were slithering through mud on slopes, splashing through opaque puddles, stumbling up narrow slippery rocky tracks and running straight into the stream. And down the slipperiest of muddy paths. And then more of that. Eight miles of it, evidently. It was lots of fun! And that park (for the locals: Newnham Park in Plympton) is worth a visit! It’s not very park-like, but very beautiful in its ruggedness. 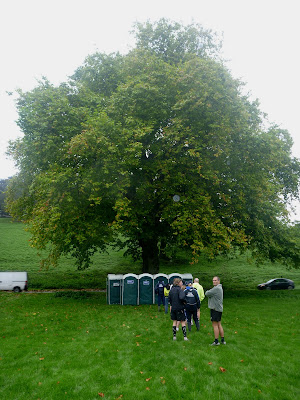 Part of a race too: queue for the toilets a few minutes before the start! 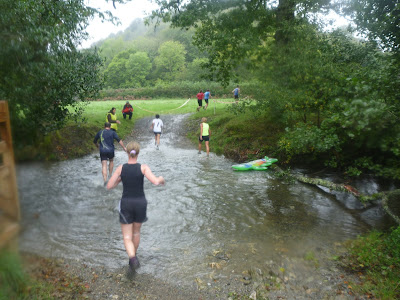 Not all river crossings had an inflatable crocodile.. 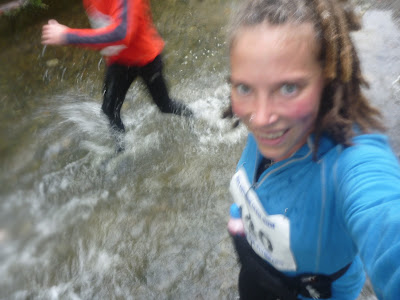 I had fun...
I had been a bit worried about blisters, as we would run almost the entire race in soaking socks and shoes, but it was no problem. The second last mile was almost entirely knee-breaking terrain, so I was slow as anything, but that way I had energy left for the last mile, which was on the most solid terrain of the whole race. I made up some of the lost time, and came thundering past several people in the last tens of metres before the finish. Two of these turned out to be parked right beside me. Oops… 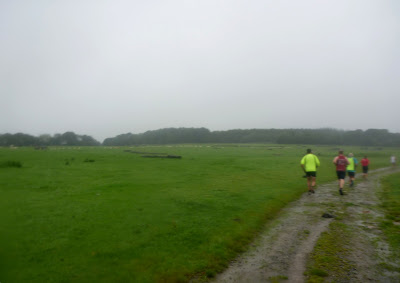 Running past a herd of sheep in the drizzle. This was one of the most even parts of the race! Most of the route was unphotographable due to either darkness, or the requiring of all one's attention in order not to hurt oneself, or both...
I came in at 1:16:30, which is a time I’m quite happy with. And maybe I should indeed join that club… Running combined with water and mud; how can I resist?
Posted by Margot at 17:01