Yes, another race blogpost! It may get almost as boring as caving blogposts. Was there anything special about this race? Well, not much I guess. It was a 7 mile race through sunny moorland. For me the special thing was that I had not had a comfortable run for well over a week. I had just been dragging myself along! Last week's extensive evening programme had taken its toll. And this week had been adding to that. I hoped the race would provide enough adrenaline to make it easier, but it didn't. My legs were made of lead! It was the most difficult race I'd run so far, even though the route wasn't very trying and it wasn't very far. But I was extra proud and relieved to have made it! I even had a personal supporter. And 7 miles in 58 minutes isn't bad at all. Not by my standards, anyway.
I had gathered my time wouldn't be so bad as I saw the usual faces around me; the world is small, and you run into the same people all the time. And you would end up running near those with a generally similar pace again and again. Even before the start I recognised a woman I had spent quite some time running behind, both during the Totnes 10k, the Saltram 10k and the Autumn Trail Run. And I finished just behind her, indicating I wasn't really slower than normal. To be more precise; I finished right behind her two weeks ago as well! And I wasn't slow relative to the field; I tend to finish in the middle, but this time I was 150 of 380. My next run will be the Plymouth 10k, and my preparations again will be most questionable, but if I can manage to stay close to that same lady I'll be fine! 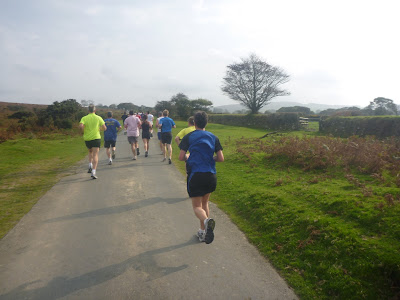 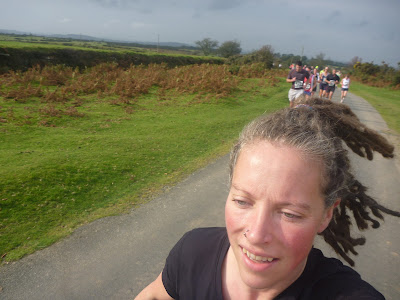 The tormented face isn't a coincidence...
Posted by Margot at 17:16