Caving for the stressed

When the work stress hits everything suffers. Caving is a good stress release, but it takes time, so it also adds to the burden. But last week it worked out quite well! The normal club trip would go to Pridhamsleigh, but for those not so interested in natural caves there would be a rather short, but wet, trip to some adit. And that sounded like something right up my street!


Dave suggested he’d pick me up from other Dave’s place; that’s on the route, so he wouldn’t have to make a detour. In return from saving him the detour I negotiated the right to try and drag him out of the pub afterwards if I figured it was getting late. So we got there, got into our wetsuits, waders and other kit of preference, and through the scenic night we walked to the adit. It was beautiful! Clear water that offered an unobstructed view on the (very rare) wooden tram rails on the floor. Waist deep water! I like. But the adit didn’t go very far, so we were out in no time, and off to the pub, where Dave indeed allowed me to drag him out again after one pint. And then I had a fast downhill bike ride from other Dave home. I hung out my wet kit, put my headlight batteries in the charger, made myself a cup of tea and enjoyed that as early as 22.45! That’s how it should be… 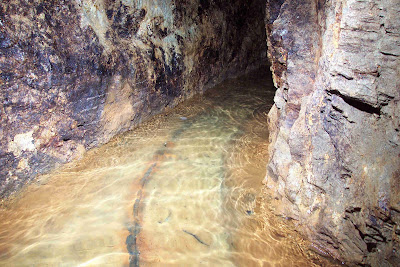 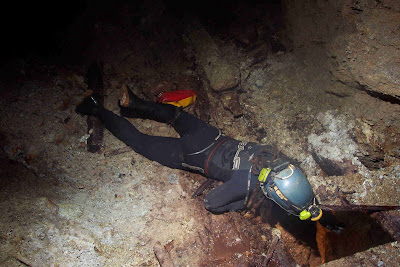 I got turned into "flash monkey"; I'm pointing a flash gun down a flooded winze so Dave can take a picture of it. Or of me, of course... 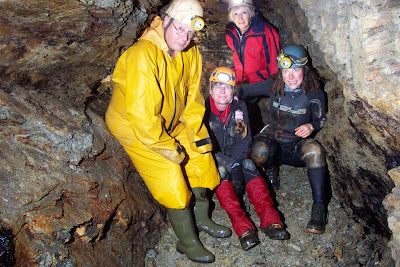 The dream team minus Dave, who's taking the picture 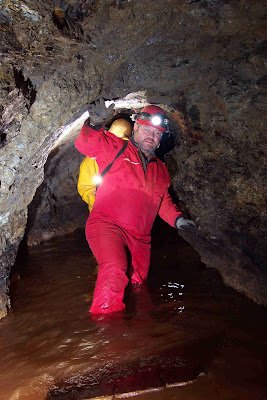 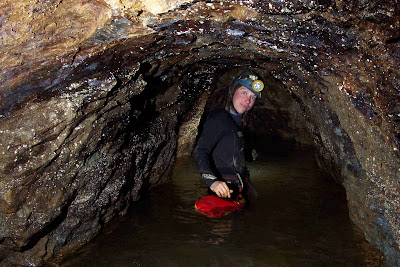