Northern Germany or northern Scotland? When making an esthetic choice, Scotland wins, at least as far as I'm concerned. Luckily, when you do sea level reconstruction, Scotland wins again. Originally we would go to Mecklenburg-Vorpommern, but closer scrutiny showed us the salt marshes there would not meet our requirements. The Durham team then boldly set out to find a better field site in Scotland, and they found an excellent one, near Scourie, in the northwestern tip of Scotland. So on a sunny Sunday morning Roland and I set off from the far south to the far north of the UK, meeting the intermediate-living Durham heroes in Inverness, and together pushing even further north, just managing to find an open fish and chips place in these abandoned backlands.

We reached Scourie without incidents, and we dropped off Roland at the B&B. Tasha, Antony and I pitched our tents on the camping site only a stone's throw away. And in a whiffy we were ready for a Scottish snifter and a pre-fieldwork meeting in the local and depressing hotel pub. 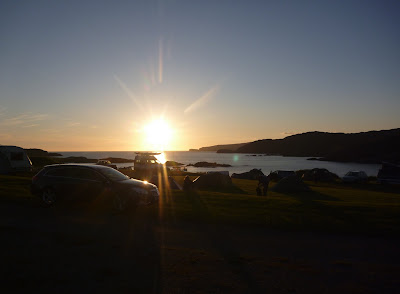 The campsite that evening, with our three tents and the rental car in the foreground

Three pints of beer allowed me to check it was a beautiful early morning. A bit later in the morning we got up, and gathered at the stove for coffee, tea, and jam sandwiches by means of breakfast. And not much later we got our first view of the marsh of our choice. Upon reaching it, Tasha inserted a benchmark, and placed the GPS on top of it to find out where exactly it was, while Antony showed Roland and me around. A beautiful landscape with beautiful marshes in beautiful weather! What more could one ask for. But we had to get moving. We only had two field days! 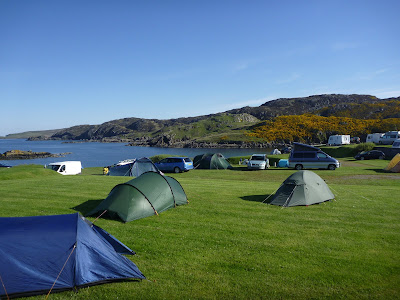 The campsite the next gorgeous morning 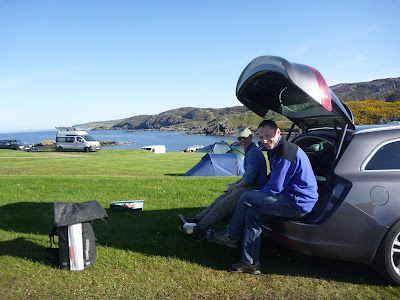 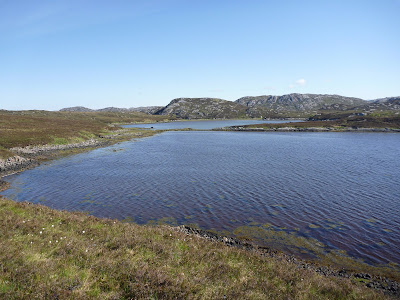 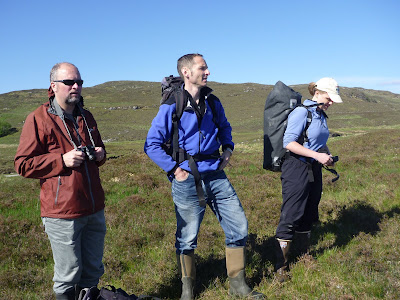 The men cored a transect while the girls started taking surface samples. And we moved like the wind! By lunchtime (oatcakes with tuna and cheese!) we had finished the sample bags, and the men had cored all the way to the other side of the horizon. We decided that the best thing to do now was try the local shop for more sample bags, while the others would search for basal peat. I was the designated driver, so I enjoyed a walk over the sandflats, as tide had dropped by now. I cleared the shop of any remotely suitable bag and returned to see amazing progress. We were nailing it! But there we also signs of wear and tear; we had not expected this while planning this trip, but it was thirst, sunburn and overheating that drained our powers. I was scurrying around in shorts and a T-shirt! 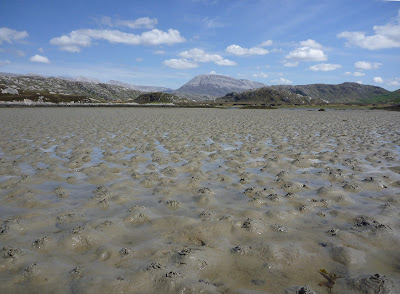 The surroundings with low tide 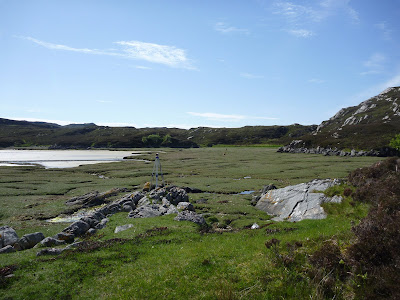 Our marsh with some surveying kit on it 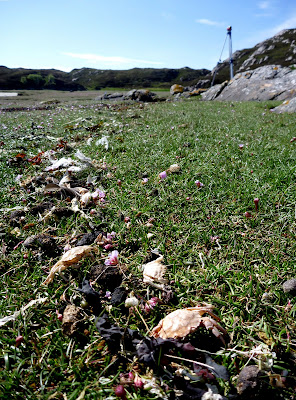 For some reason we found several bands of washed-up crab cadavers on the marsh. None of us saw even one live one! No idea what had caused that.


We would not finish that day. But no need for that. We went back to the village for a shower, a meal in the hotel pub, and another snifter. This was my chance to try haggis! And I like it. After the food Roland wisely retired, and I intended to follow that example, but that honourable intention was thwarted by Antony who felt like a game of darts or pool or whatever Brits like to do in pubs; accompanied by several pints of course. I tried to resist but he shamelessly threw in all his merciless masculine charm. Do I need to mention I was chanceless, and we went from pub to pub while the sunset outside was stunning? The camping site had a pub too; even more soulless than the previous one, and inhabited by a.o. a bloke from Durham (from a rival college!) and a woman that struck fear into all that came close. 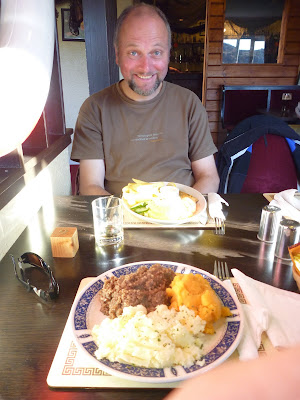 My haggis, neeps and tatties! And a very pleased Roland behind it. 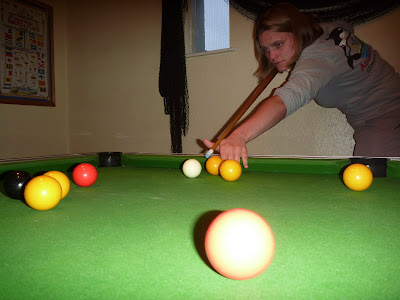 Tasha looking grim during a game of bad pool 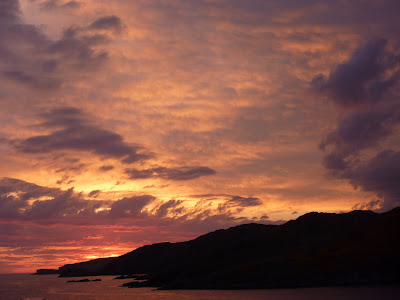 We should have been outside, of course, watching this, and not locking ourselves up in the most depressing pubs ever, but well, what can one do. 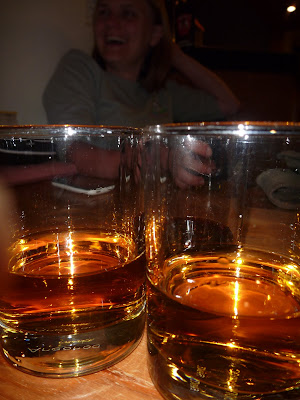 No comment needed, I think
The next day we woke up to a mercifully cloudy sky. No risk of heatstroke today! We were off to the marsh, where Tasha and I finished the surface sampling while the men had a look at another corner of the marsh. After a while Roland came up to me, declaring that he and Antony were going crazy. An unsurprising yet apparently unprovoked statement, but I realised soon he was referring to midges. I gave him my anti-insect-shoepolish and hoped it would work. When we couldn't go any further with the surface samples until the tide dropped we went over to assist them, and quickly were engulfed in masses of nasty bugs as well. Annoying creatures! 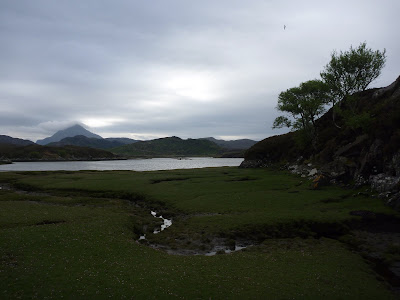 The marsh looking a bit more Scottish the next day
When we got hungry we climbed onto the highest nearby hill, hoping to catch such a breeze the midges would be discouraged, but no such luck. The view was stunning, but we had to enjoy that, and our lunch, walking around and waving our arms to keep the enemy at bay. We only now realised how lucky we had been the day before... 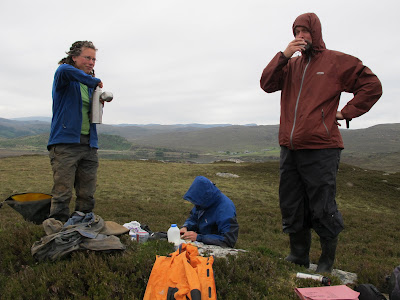 Lots of clothes, not against cold, but against the mosquitoes 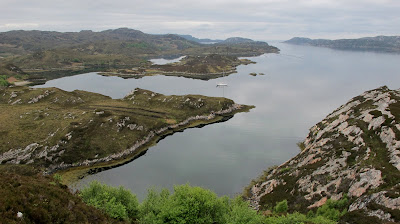 But the view was great! 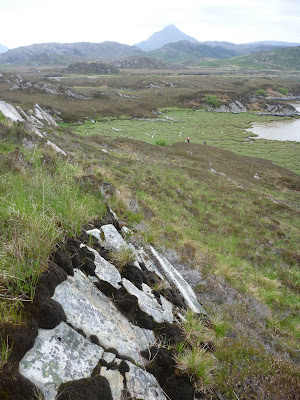 Our marsh with some decorative black moss on the foreground
We went back down, finished what we had to finish, and fled. Antony had been making plans for a BBQ, but regarding the inevitable uninvited insect guests we decided against. Instead we first failed to find two old benchmarks that had been near, but might have perished in the construction of the road, and then we went for the usual post-field shower. Then a luxurious dinner awaited us in a nearby fish restaurant, that somehow managed to survive despite closing at 7. And when I say luxurious I mean more luxurious than the pub that served haggis. And it was a very nice end-of-fieldwork dinner! Excellent fish, good wine, amazing view. All good. 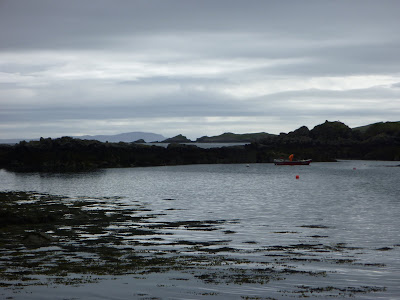 The view from the restaurant when we booked it. When we were actually eating there the skies were clear blue!
After dinner there was only one option: back to our depressing hotel pub. So we went there, and enjoyed a range of whiskies, while planning the details for the trip back. The whiskies were good, and the mood was merry. Perhaps not walking entirely straight we got back to our abodes for a night that would be too short.
Somewhat foggy in the head I woke up to Antony's call. He had already taken his tent down. Soon afterwards Tasha had too, and had already seated herself in the car, which I wrongly interpreted as impatience. When I had hastily hurled my tent down and hurriedly forced all my stuff into the bags, hangover and all, and joined them, it turned out that Antony had been an hour wrong in waking us up, and there was no hurry at all. On the contrary. And Tasha was sitting in the car to seek shelter from the wind. On top of that, we had forgotten to buy more breakfast, so rations were scarce.
When we later teamed up with Roland Tasha concisely described the situation: "we've been eating grass and we've been up since six". I just resorted to foggily slouching in the car while Roland drove to Ullapool; there's a tide gauge there we wanted to see. Geeky but true. We didn't find it. I slept in the car on the way to Inverness.
In Inverness Tasha and Antony were faced with the challenge of transporting all that mud, together with their luggage, with only the two of them. It would cost quite some sweat before they would be home. Roland and I went off for some lunch; my hangover by that time had faded so I was up for it. Then we brought back the rental car, got a ride to the airport, and checked in. At the security check I paid for my wooden head and self-imposed hurry of that morning; just using your field bag as hand luggage goes all wrong if you have been using a sediment cutter. Security doesn't like cutters. Luckily I was in time to just check my hand luggage in as well... I found Roland behind security, wondering why it had taken so long, and having bought me a bottle of water. After that the trip went smooth.
So around 8.30 I was home that night. I was tired but satisfied! That was the quickest fieldwork so far, but we'd nailed it. Now let's nail the processing too!
Posted by Margot at 16:51

Scotland wins against Northern Germany? You`ve never seen the beauty of very deep, dark clouds above very green gras.
And our cows are the strongest in the world!

Hei Carsten! Good to see you around. And, I must say, very deep, dark clouds above very green grass sounds fairly Dutch to me as well. But maybe I should go to the region we now failed to visit and check the differences! While keeping one eye on the strong cows...