Quite unexpectedly I received an invitation to a sort of a housewarming-barbecue from Sally, who had taken me horseriding in autumn. I had no idea she was moving! When I walked through the street she apparently now lived I wondered if it perhaps was just a prank. Who would believe such an abrupt move. But it was no prank. The house had no number but a name, and the only house without a name sign had to be the one by exclusion, so I cautiously approached it. I was relieved to see a dark-haired lady in the back garden! It was the right house.


The first thing I did was shake hands with Sally's husband, which was a long anticipated pleasure, as the young man had been so conspicuously absent everywhere I had been doubting his existence for months. Then I got introduced to the others, among them the juvenile reason for this fast move: Olive, Sally's puppy! A very charming half German Shepherd half Rottweiler. A lady like that should not live in an appartment in town. And this place was on the edge of Totnes; much more suitable.
I was quite rired after a week of microscoping and caving, but it was worth coming to Totnes! When you're tired, being in the spacious back garden of hospitable people, surrounded by puppies horsing around, faffing with a barbecue and watching a bonfire is quite a good thing to do. 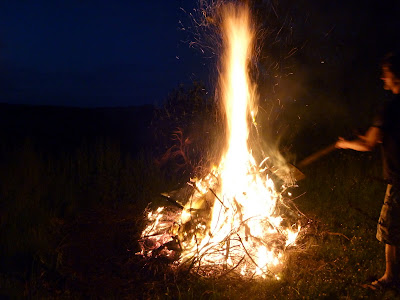 A bonfire is a good way of getting rid of gardening waste... 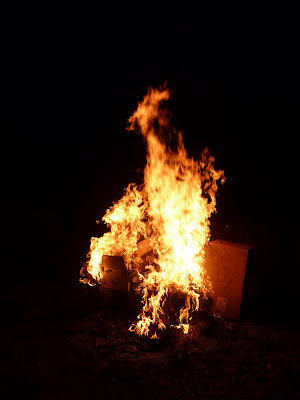 ...and of the cardboard boxes that come with moving house
Posted by Margot at 17:22