Hitchhiker in need of guide

I was driving back from Wales with a beautiful view on the hand of my fuel indicator going closer and closer to red. Time for filling up! When I left the gas station near Bristol I had to give priority to all sorts of cars, which gave me the opportunity to actually take notice of my surroundings. In the grass next to the lane sat a young man. And I thought he was just sitting there for the heck of it, until I noticed the bit of cardboard in his hand, which read "Devon". An inconspicuous hitchhiker! So I opened the door and asked him where exactly he had to go. He was not very clear about that. I told him I was headed for Plymouth. He then asked if that was close to Devon. I figured this was going to be a tiresome conversation, but I managed to find out he wanted to go to Exeter, so I told him to jump in. 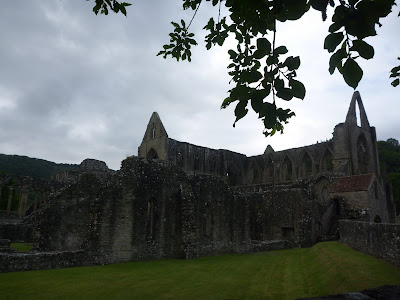 Between Monmouth and Chepstow I was unexpectedly treated to this sight: Tintern Abbey!
He kept on going on about that there should be signs indicating Devon; weren't there signs indicating Cheshire as well? And wondered if Plymouth was near "the main part" of Devon. I gave him the well-meant advice to get his geography together if he wanted to become a more efficient hitchhiker. Efficiency didn't seem to be his thing, though; he was homeless, and looking for work on a farm. Not an enviable life. And exhausting, too; around Cheddar he fell asleep, and didn't wake before Exeter. I hope he found what he was looking for.
This wandering boy had the questionable honour of being my first hitchhiker! I haven't had many opportunities to accomodate any. There were not many around in Norway. Neither in England, actually, and I hardly spotted this one. But I think it's a generally good thing to use the space of your car if you can. We'll see, maybe others will follow! And maybe even those who have some grasp of where they came from and where they're going to...
Posted by Margot at 10:16