If you take the word of Rob, our PhD student, for it, cavers are very suspect folk. Me being a caver I can hardly be expected to be objective, but I think on average we’re fairly kind people. The southwest being littered with mines and caves, it’s also littered with caving and mining clubs. And clubs in general tend to suffer from sibling rivalry. But in this case, it’s more sibling than rivalry; many people are a member of several clubs at the same time (with yours truly as a good example), and it’s not unusual for clubs to have joint outings.

Last Tuesday witnessed such an occasion; members from a befriended organisation had been scouting out a mine, and come across an as yet impassable shaft. But what is impassable today may not be that tomorrow; some addition of a makeshift bridge, for instance, could easily solve that. And that was the plan. A logistic difficulty in this was that the mine adit was far away from the road, and at such distances, scaffolding poles can get very heavy if there’s not enough hands to carry them. So they called upon their subterranean connections, which would be us. And we showed up in large numbers! 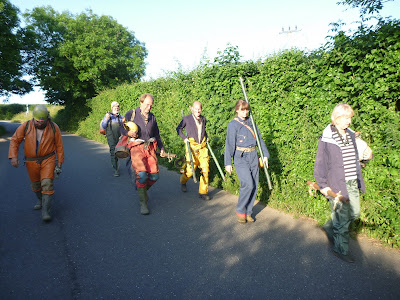 Part of the crew
We gathered, loaded the scaffolding pipes and their paraphernalia onto our shoulders, and set off. Walking speed varies significantly among the individual cavers, which normally means Lionel legging it at the head, and the Daves trailing at the tail. This day was no exception. When Lionel, Rick (from the Tamar mining club) and me finally came to the adit, everybody else had vanished from sight. Rick didn't hesitate and vanished into the narrow entrance with his scaffolding pole.

I had dressed to the carrying of scaffolding poles, and not to the mine, but it would have to do; no way these men were going to have all the fun without me! So I crawled in behind them. Before I knew it I was standing in mud halfway up my thighs, with Lionel in front of me muttering that hís digs were much cleaner than what we were faced with here. 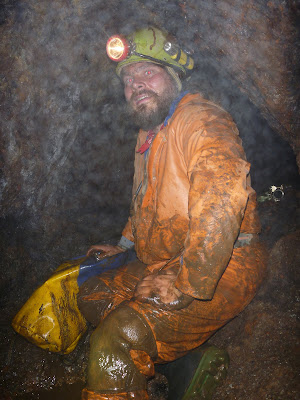 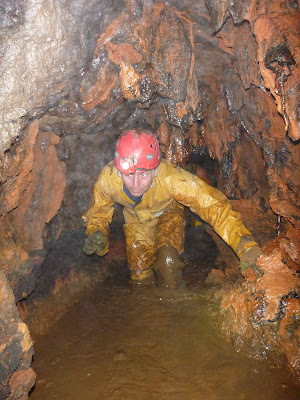 Lionel in knee-deep goo
We came to the actual site, and the men theorized a bit on how to set about things, even though that was not scheduled for today. We left the materials and went back. By then the rest had arrived too, and while we had a look around the rest of the poles were brought to where they were needed. Time now to head back and grab a pint!

In the pub plans were made for regrouping to build the actual bridge. I'm invited! So only a week from now we can do this trip again, but then going further, to where nobody may have ventured for 100 years...
Posted by Margot at 14:13