In the previous blogpost I describe why a Plymouth resident would go to Cowbridge, South Wales, to get a valid ID. There are times in which one could have more reasons to pick South Wales for such a quest. Family business!

It may not be so evident why that would work if one’s family is distributed over the Netherlands and Finland, but sometimes fate works in strange ways. The first possibility for the consulate to give in to my wishes was in the beginning of the period my father, his wife, her sister and her friend would be hiking Offa’s Dyke Path, near the English-Welsh border. So I was only an hour away from him when I was standing outside the consulate.

I had a booking for the same hotel as them, a detailed description of what route they would take, my dad’s mobile phone number, and the information he didn’t really know how to use it. And with that I started my quest.

I soon found the hotel, and sent my father a text message asking how far from town they still were. No answer. So I just set off! My dad’s good with navigation, so his description of how they would approach town was clear as a hammer on a church bell. I expected to see them appear behind every curve in the road...

At some point I was climbing a winding path through the woods, when I saw the trees retreat and the slope end. I figured that may give me a wide enough view to spot them! And lo, indeed I did; only some tens of meters from the end of the trees I saw two white heads. I shouted, but that did not have any impact.

I came so close they really could not fail to notice me. It was good to see them! It turned out the other two had chosen another route. And it also became clear they did not expect me to come from that direction. A discontinuity in navigation after all! But without consequence. We walked to the hotel together. They were tired after a hot day with 27 km... they deserved a beer. So that was top of the to do list. Elly and Gerda, the other two, had just arrived seconds before us, and felt like a pint too.

The rest of the evening was spent on shower, food, and an early bed. I had figured out the best thing to do would be walk with them the whole next day, sleep there, and then go back to my car in the morning and drive back. Between Monmouth where we met, and Pandy we would sleep, there would be 27 km of nothing. And nothing has difficult logistics. Their B&B only had 4 beds, so I’d bring my tent, and sleep op the nearby camping.

The next morning we had an English breakfast (in Wales, mind you!), bought lunch, and were off. It was a beautiful day and the landscape was friendly. The occasional passing person or dog too. And while walking there was ample time to catch up. I don’t see these people very often! 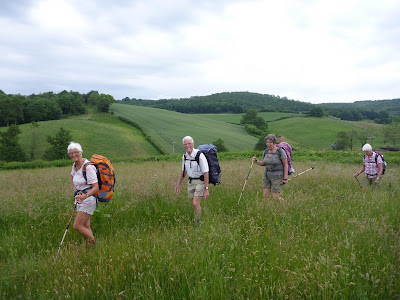 My companions: Joke, Wim, Gerda and Elly
The hills were rolling and the route was clear. Generally. Various types of cattle adorned the way, and many a meadow allowed us a coffee break. Insects were a nuisance, but long trousers solved that. And in that way the day unfolded quite pleasantly. My feet hurt from the asphalt that was found along the route, but that was foreseen and accepted. 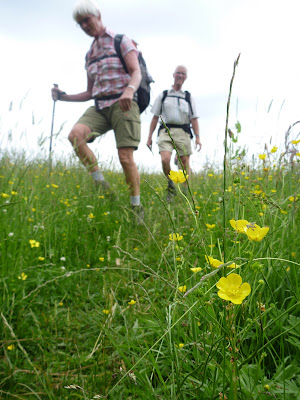 It was special to have such a long walk with my dad again. He’s slower than he used to be, but he gets there! How many people pull this sort of thing off at 72. And I realised Joke has already been his wife for half my life... that gives a lot of common past. I don’t know the others very well, but they were nice companions. 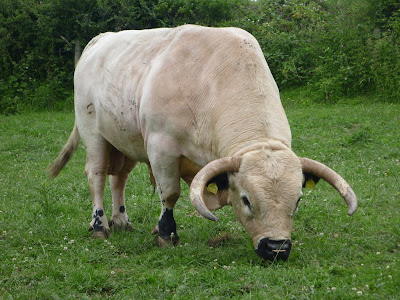 We met all kinds of cattle that day! 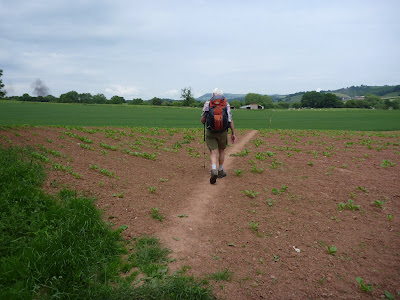 The path sometimes went straight through orchards and fields...
At four o’clock we passed an impressive castle, which unfortunately came with impressive rain clouds. Soon it was pouring down. And that didn’t last long. But the dry spell afterwards lasted much shorter. With a few dry minutes as exception it rained for the next three hours; often torrentially. I realised I had underestimated this trip, by not even bringing my backpack’s rain cover, and leaving my waterproof trousers in the car. The mood did not suffer significantly, though, and the speed picked up; rain refreshes, and diminishes the desire for coffee breaks. So close to seven we reached the edge of the neighbourhood the B&B was in. But only the edge. There was a path that seemed to lead to it, but it lead past, separated by a solid, sturdy British hedge! Just what we did not need. With some fence-climbing and field-sloshing we found an entrance after all, and soon after entered the B&B, all dripping. 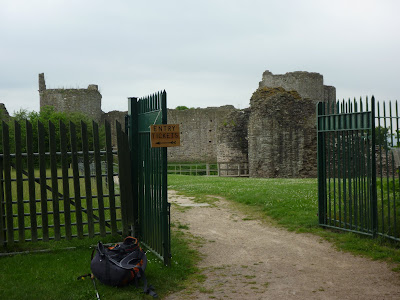 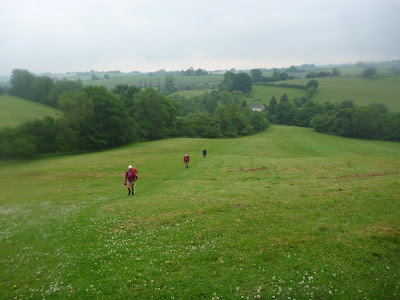 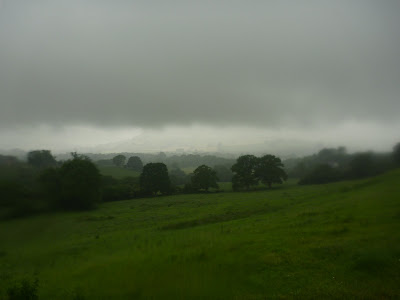 The heavy rain did look good! Felt slightly less optimal, though.
The lady did not mind our puddle-creating talents at all, and was even willing to put me up for the night as well, on my camping mattress in Gerda’s room. I do not see myself as a fair weather camper, but this was welcome! So we hung out our wet stuff, had a shower, had a cuppa, and went to the pub for a hearty meal. Food is good after a day like that!
None of us are diehard party people, so this was an early night as well; for me an unexpectedly good one as the B&B lady had given me a thick duvet to boost my thermarest. And the next morning another British breakfast would be the venue for my departure. I had ordered a cab to bring me back to my car before my parking ticket would run out, and it would come in the middle of the breakfast hour. A few last pictures were taken and cheeks kissed, and then I was off! It would be a sunny day of “only” 15 km for those I left behind; I hope they had a good day. And a good trip further along Offa’s Dyke!
Posted by Margot at 10:12