I want to go to the USA and therefore I had to first go to Wales. If you want to enter the USA your passport has to be valid for another 6 months. A ridiculous rule, but nobody has the power to tell the USA that in such a way that they'll listen. Mine of course would only be valid for another 5 months. And the Dutch consulate in Plymouth does not issue passports anymore.

One can go to Southampton or Cardiff. I've been to (the vicinity of) Southampton several times, and it's not a very pleasant drive, with 2 lane roads with a roundabout every 100 meters. The train connections suck too. And I'd never set foot in Wales! So Cardiff it would be. Or rather; Cowbridge, as the consulate actually is in a village west of Cardiff. 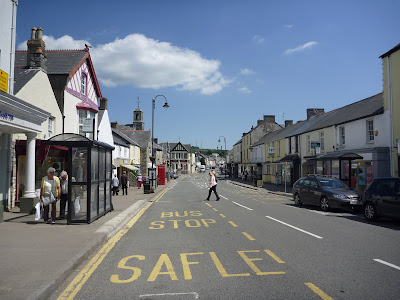 Cowbridge
So with proof of address and my old passport I drove up, on a sticky sweaty Thursday. And arrived in good time in the hamlet of choice. Checking the address my heart jumped; the first thing I saw was a big sign indicating the Norwegian consulate! Then I noticed the smaller sign below of the Dutch equivalent. 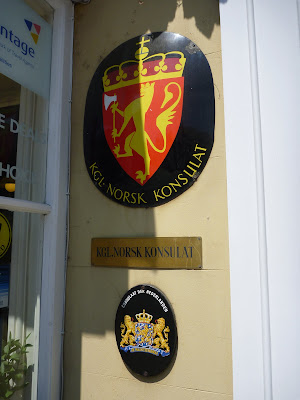 Inside they advised me to first go to the chemist on the other side of the road, for pictures; there they know exactly what the requirements are for the pass photo. That was done in a whiffy. So then I could hand all necessary paperwork over, and have my fingerprints scanned. The friendly man helping me out turned out to be both the Dutch and Norwegian consulate official! Not that he spoke either Dutch or Norwegian, but still. And 15 minutes later I was standing outside again. And it’s only a matter of time before I have a passport with all bells and whistles and vuvuzelas one could imagine. A questionable honour, but it will get me to our fieldwork!
Posted by Margot at 21:35

Let's start with spicing up your blog with a little bit of vuvuzela then...

USA - this symbol of the free western world - can really cause troubles if you want to go there. When I lived in Greenland I needed a journalist visa for US - and since there was no US Consulate in Greenland I had to go alle the way to Copenhagen. Because you can't get an US visa without a so called "personal interview" with a staff member at the embassy....

When they had actually spoken with you, were they willing to give you that visa? They're not famous for appreciating loudly criticizing types like you Jesper... :)