Humans are only human, and if you think they’re not, you’re in for a surprise. There was a mad and wild caving trip planned with the Cornish Nutters, but a few days ahead I received notice that they had changed the plan. Instead of the enormous and dangerous mine system they initially planned we would do two smaller mines; one before and one after lunch.

As usual I drove up with Dave, and we were so early I had time for a pint of coffee (no exaggeration!) at the meeting point. And then we went; to the spectacular cliffy coast of northern Cornwall, which was basking in the sun. So we got into our kit and walked down the cliff to some anchor point we knew would be there in the rock face. 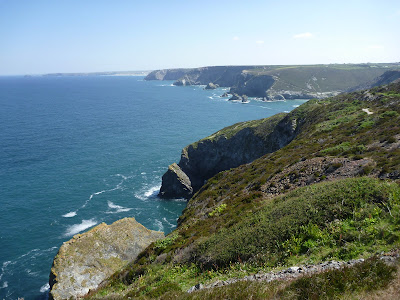 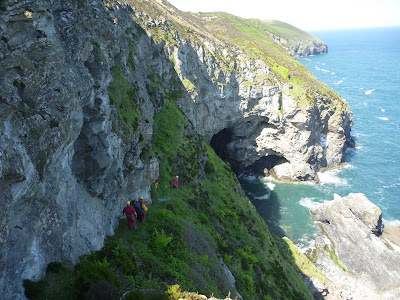 We found them, rigged it, and already lost the first man. Some Cornish men actually are afraid of some things! There was a guy I’d not met before who turned out to be afraid of heights, and he buggered off back to the cars. Mike was the first to go down the rope. It took a while! Soon we found out why; we saw his sweaty face appear again. He said the rope wasn’t long enough... so we re-rigged it, and off he went again, followed by Simon. By that time Mark woke up, and realised they had gone the wrong way. It wasn’t down at the beach; the entrance to the mine was not much more than 10m below us! He shouted to the men at the beach while Darryll, who also knew the way, went where we should have gone. 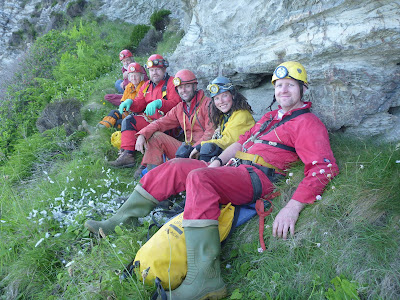 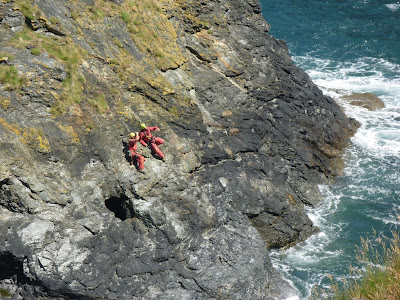 While we assembled at the adit we saw Mike and Simon happily scurrying over the impressive rocks on the other side of the beach, and finally just walking up from sea level, which rendered them epically sweaty. But now we could go in!

I was in the lead with Daz, and he seemed to know the way. We headed for the sea cave we knew was connected to the mine tunnels. Soon, however, we didn’t hear the rest, and Daz found a dead end. Not this way, then; time to go back. I scurried back through the squeeze, and moved on, finding Trish on my way, who had said the others had gone somewhere else. By then it started to be conspicuous I didn’t hear Daz behind me. I went back, wondering what he was up to. I found out he had gotten stuck in that first squeeze on the way back; his belt had gotten hooked behind an edge. By the time I got back to him he had managed to get out of that predicament, though. Good to be reminded that lean and experienced cavers can also get stuck...

We found Mark back at the entrance of the tunnel that lead to the sea cave. Impressive! But there was nothing more to see here (except for a shaft used as a garbage dump; not very pretty) so we went back to where we had started, and then the other way. Daz showed me a shaft he had had to get some guy with spinal injuries out of years earlier... that must have been one huge challenge. 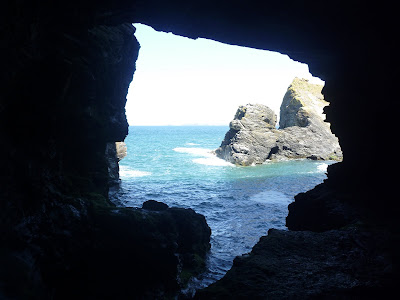 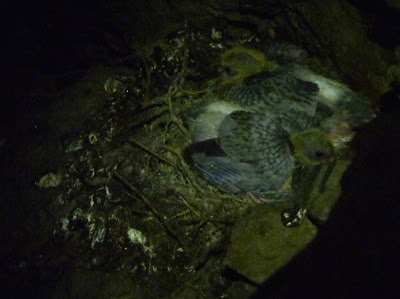 Some nesting chicks near the sea cave (above); I tried not to disturb them with bright light
Going into another tunnel we found daylight. It ended at the cliff face! So we sat there for a while, looking at the surf battering the cliffs, waiting for the others. When we heard them we made place for them; not enough room for all of us. Going back to the squeezy entrance Darryll was set to work again; Mike was audaciously trying to get through with his bag on his back, which was a moderately good idea. Some confusing scene followed where Daz managed to somehow get the bag off him in mid-squeeze, which gave rise to some interesting configurations. But it all worked out, and Dave made it through too. So we could scout out the remaining tunnels. The next one ended in a collapsed bit that looked like it would not be a good idea to try to dig it out. The other way the floor fell away; Darryll didn’t care and jumped, and so did Mike, but I am a bit weary of jumping, so I just doodled and moaned until Mike talked me down. We thus ended up in a pretty lode, but that also ended in an unnegotiable collapse, and we went back. We’d seen it all, so we went back to the entrance and got out. Lunchtime! 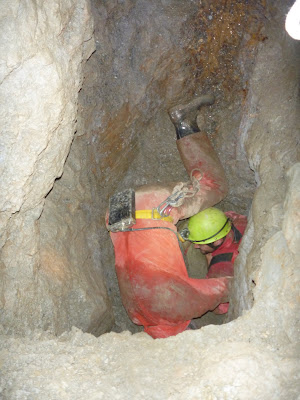 Darryll trying to get Mike through a squeeze
We got back into our SRT kit and ascended the rope, keeping an eye on those below us. When I got back to the cars I found Dan the vertigo-man, and Mike and Daz in their civilian outfits. What’s that; no second mine? It was 3.30 already, and they figured that second mine could be done some other day. Dave agreed with that, so I changed too, and enjoyed my sandwiches in the sun. When all were up it was agreed that we would not do the second mine, but drive to the mine we initially would have done, to have a look, and then each go our separate ways. 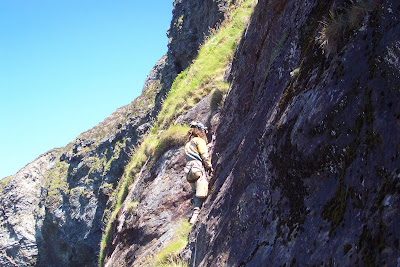 Me coming back up the cliff
Feeling a bit strangely dressed in my tanktop, shorts, very muddy boots and helmet I walked to the adit. It seems that normally, there is an enormous draft through the adit, which is so loud your ears ring. Today it was quiet. We had a look at the vertical shaft through which the draft travels, and through which we were initially planning to travel through too; it looked attractive! Mark demonstrated that going into a mine tunnel without a helmet is a bad idea, even if you only go in a few tens of meters. And then we called it a day.
It was only 5PM or something. I never thought we would ever be done so early! And I wasn’t all black and bruised and soaked and exhausted and dehydrated. But it was a very pleasant day with a nice mine, pretty views, and good company! One cannot complain.
Posted by Margot at 08:18