Should I blog about every time I go caving? I just officially joined my 3rd caving organisation, and I am tempted to join a 4th, and it's getting a bit much. But this Wednesday there was another rescue training, and I had made a pretty picture of cave rescuers huddled around a heyphone. Reason enough to blog.
We would do Haytor Mine. The idea was to get familiar with the mine, and to try our specific radio in iron ore-infested surroundings. No plastic casualties to be recovered this time. So we scurried through the breadth and width of the mine, and tried to keep communication going with a team at the entrance, using the aforementioned Heyphone. It seems that that is a radio specifically developed for cave rescue by a John Hey, which uses the earth as an antenna. It did not work flawlessly, but in an emergency situation it may not either, so all the better if we would train to get the best out of it in limiting circumstances. So we did! Another evening well-spent. 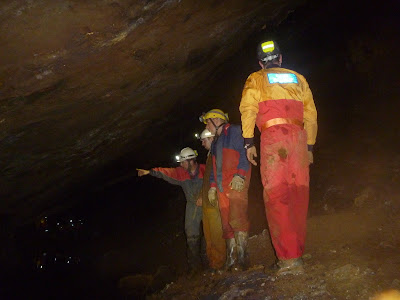 The small lights in the background are the guys faffing with the radio; we explorers have gotten a bit distracted by a lake. Do notice the fairly steep ceiling, which indicates the general slope of all stopes. 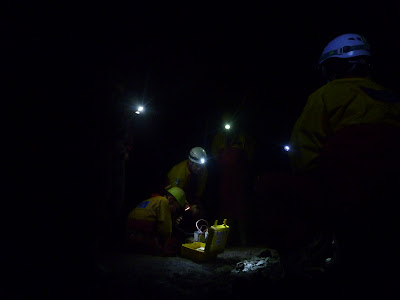 Heyphone training in progress
Posted by Margot at 01:49