Fieldwork against the odds

Our annual fieldwork, which used to be in South Wales but is moving north due to Covid considerations, has always been quite a behemoth to organise. I once had to do it as the original organiser was paternal leave. But now I have to do it again, as the current organiser is on compassionate leave.

By May it was clear he was going to be off work for a while, but it was more than a month later when it was decided that it was going to be me having to do the job. That meant a valuable month was lost! And as soon as you hit June, you end up with the people you need to communicate with being away on holiday. It was already going to be awkward as this would be the first year without Suzie, but now having to do with without Martin as well (he will be there at the actual fieldwork, but he's not organising it) is an extra challenge. And, of course, we are all busier than normal as we have to do Martin's job in addition to our own.

We also suffered some technical issues in the run-up. We have been having problems with our coring kit for years, and this year looked like no exception. We also intended to use a very snazzy 3D laser scanner for the first time, there were issues with software, and with the fact that it was technically owned by a research project that had come to an end. But I managed to sort it out.

Altogether it is a challenging module to sort. But I trust we will manage to pull it off again. I think the students will notice that something isn't quite the way things normally go; for instance, they probably noticed that initial communication was by Martin, and then later it changed to me. And it is quite thinkable they will notice that some information is reaching them bit late. Even though that is probably tempered by the fact that the whole University is a bit slow; every module has a module website, and none of these websites have, as I write this, the students registered on them. This is done centrally. And of course, as far as the students are concerned, these websites don't exist until the moment they can actually see them. And it is as good as September, and we don't have the timetable yet either. So altogether I think that we will almost manage to run this fieldtrip as ever. We might have arranged a few things quite close to the deadline, but mostly, the students will never know! And some of this will be obscured by the opacity of the University. And as long as all the bits that we have control over seem fine to the student cohort, it's okay. I think we'll pull it off! 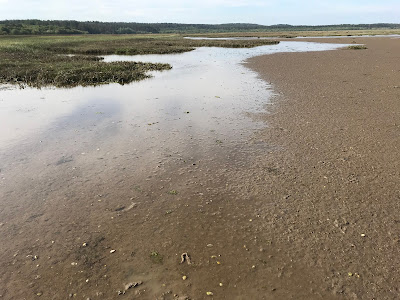