Sleeping with the cat (or not)

The first night the cat stayed in my house I kept the bedroom door open. She was in a new and strange house! Maybe she would find my sleeping presence reassuring. And I didn't know yet whether she would be disruptive. And I soon found out: yes she seemed to find my sleeping presence reassuring (she did curl up against me), but yes she was also being disruptive. So the next night, that door stayed closed. And I have spent months locking myself into my bedroom when I went to sleep.

One night I was ready to go to bed, and the cat was lying on one of the chairs of my breakfast bar. She looked rather calm! And it seemed churlish to boot her out of the bedroom, so I just left her there. I kept the bedroom door open so she could go downstairs for food, water and/or the litter tray if needed. And when I woke up in the morning she was still lying there! And I had no recollection of any disruption, so I assume there was none. I know I have a bit of a habit to sleep through all sorts, so maybe she had been on the prowl, but that is not a problem if I sleep through it. So it was a success! 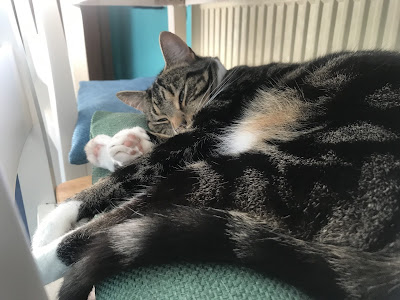 The next night I kept the door open again. This time she joined me! It is nice to have a little purring body next to you then you are falling asleep, but this time I did find the cat meowing loudly in the middle of the bedroom at an unknown hour. That was exactly what I had been trying to avoid by keeping the door closed! That morning I was a bit bleary-eyed when I got up. That night the door was closed again.

As I still felt a bit weak in the knees at the memory of the little purring body, the night after I tried it again with the door open. This time I was in the upstairs bedroom. And the little purring body appeared again. But later she went away to do other things. And then, again at an unknown hour, I heard her walk into the bedroom again. And then I heard her rummage around under the bed. And then I heard a loud squeak. She had brought a live mouse into my bedroom! I wasn't overly keen on that. I didn't think that sleeping would go together well with Tom and Jerry-like scenes. So when I heard her trot out of the bedroom again, presumably with the mouse in her fangs, I closed the door behind her and resumed my sleeping.

I think I will just play it by ear from now on! When the weather is consistently bad outside, she seems to be more hyper in the evenings, as she hasn't got rid of her excess energy outside. So maybe when I am not very tired, and she seems not to be too hyper, I will just try again. And if I really need my sleep I will keep the door closed. I suppose in the long run, there will be more scope for bedtime sharing, as I expect her to become a little less energetic over the years. But for now, she is young and enthusiastic. And sometimes a little furry purring thing!