As term hadn't started yet, I wanted to organise another social event. I imagined a barbecue in the garden. But the weather imagined other things! The rainy weather we had got just as I had come off the Slate Trail had never really left. So what I ended up inviting some friends over for was soup by a wood fire. But that was great! Of course, as soon as they all appeared the weather cleared up, so the wood fire was not as snug as it could have been, but it still wasn't barbecue weather.

I had invited as many friends and colleagues as I figured I could reasonably fit inside my living room. And I had but the emphasis on people within cycling distance. Martin had already been actively creating a bit of a local network, and I had recently visited Laura and she liked that idea as well. But with these two the living room wouldn't be full so I had invited Katrien, who lives a lot further East, but fits socially, as well. It was nice to get them all together! And Katrien and Laura hadn't been to my house since the start of lockdown. And they hadn't met the cat yet.

I had done some cleaning and tidying (!), and made sweet potato soup with cheese and onion bread. I had asked Katrien to bring dessert. And she went beyond the call of duty! She brought both a cheese platter and chocolate fondue. I hadn't seen that coming! The others had brought drinks. And everything ended up fitting together rather nicely! I suppose it was the first autumn social of the year. And I managed to not set off the fire alarm, as I had done the previous time I had had the wood fire on…

The evening took an unusual twist, as well; Katrien had unexpectedly brought balloons for making balloon animals. And she did a little demonstration! I blew up a balloon as well but wasn't so sure how to turn it into an animal. The next day I quickly googled the technique (I clearly hadn't paid enough attention when Katrien did it; I blame the much larger than normal amounts of alcohol I had consumed) and made myself a giraffe to accompany her demonstration monkey. So now I have two mementos of a rather nice evening! 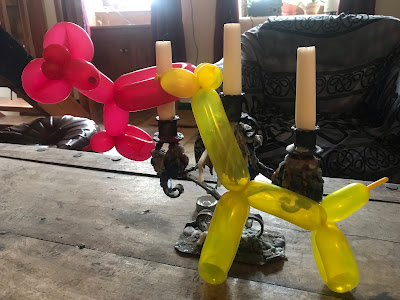