I have several pairs of shoes of which the soles have the tendency to fall off. I have done many rounds of gluing already! And I will keep doing it as long as I get away with it. I like using objects as long as I can. And so far I have been buying tubes of glue that came recommended online, but this time I thought I'd try the industrial glue I had initially bought for making the stairs to my garden less slippery, but for which I was finding an increasing number of other purposes as I had done the stairs with epoxy resin in the end. The glue also comes with a good nozzle so you can easily get deep into the space between sole and shoe. I couldn't know it would really work of course, but in the end any glue will fail, so if it does then I just go back to the previous glue. Watch this space! 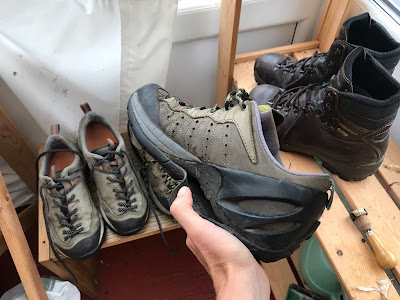