I am still very happy that I have access to Dragon voice recognition software. I don't know where I'd be without it! But it most certainly has quirks. One thing I can't figure out is why sometimes it mishears you, and you want to correct the text, it gives you the weirdest options, while omitting the most obvious ones. For instance, it is not unusual that when I say "we", it thinks I say "you". And that is understandable; when you think about it, these words sound rather similar. And they, of course, can serve the exact same purpose in a sentence. But if this happens, then "we" is never in the list of alternative options. What is in it? Rather unlikely options such as "iu". How can it suggest that, while it doesn't mean anything in any of the languages I speak, and not suggest "we"? I might never know. And in the greater scheme of things, it is not important, but I thought it was so weird I dedicate a blog post to it. Hereby! 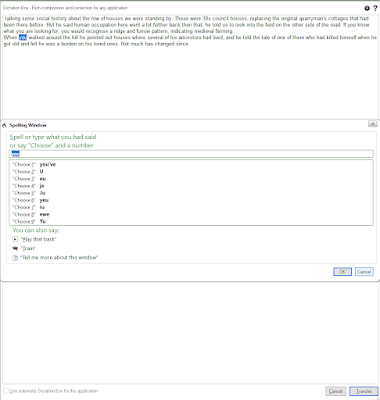