DIY often ends up more complicated than you think. For instance; if you pull a ceiling down, you just think you pull a ceiling down. But I hadn't realised too much beforehand that the ceiling had been integrated with the stairs. On the side, the plasterboard rested on a plank that rested on the banister. So how to sort that? I didn't want to take the stairs apart. I had been thinking about getting the joiner to think of something about this, but he said he wanted to focus on things he could do in his workshop. So I decided to give it a go myself! And I cut off the plank where it separated from the banister, and on the side cut it flush with the ceiling beam, and cut the plasterboard to that size too. But then! You look at it from the side, and it doesn't look good. But I had noticed you can buy decorative wood strips in the nearby DIY shop. I decided to buy one that would sort of fit and just nail it over the top.

By the time the joiner (who would make an exception for my floorboards) was already booked I snapped into action. I wanted to try to get all the messy jobs done before the floor would go down! That would then minimise doing damage to my lovely boards. Or even just make them dirty. I had had to bloody clean the floorboards in the landing so often, and every workman said they would be careful with it but they all scuffed it and spilled things on it and whatnot. I didn't want that again! So I took my wood strip and tried to saw it to size. And the wood is much lighter than the surrounding wood, but I could imagine the sun will do something about that.

Now I still have to sort out some gaps the plasterer had left, like between the beams and the wall, and take the excess plaster off the beams, and then the messy work is done! Until the joiner comes in and starts producing sawdust! 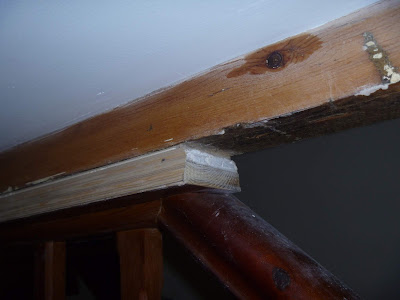 Now you see it, now you don't; wood moulding over the long end bit not yet over the top end
Posted by Margot at 09:01