When I viewed the house I was quite charmed by the landing. Such a quirky space! Originally a reasonably-sized room (if your standards are not too high) but with the staircase in it, suddenly rather small. But with a fireplace! And it had functioned as my improvised living room for a bit, before the actual living room became usable. I had imagined it as a space where I could do some things like work without having to go to the full-flung home office. A bit decadent I know; a home office and a sub-home-office! But there we are. Anyway. It had been ready for things like furniture for a bit. And I bought a desk for it! I found a nice small one that wouldn't clog the space. There are cupboards on either side (old doorways) so if I need space to put things I can use these. And I just put one of the kitchen chairs there. If I need that chair for diners I can just move it again!

It wasn't even quite the desk I intended. I had ordered a brown one! And got a partially white one. The manufacturers offered me a partial refund; it looked like they weren't keen on the faff of this one being sent back and then a brown one dispatched. And I accepted! So it's even a very affordable desk.

I think my writing corner serves a purpose. Recently I had been doing something in the living room but I knew I had to still do some stuff on the computer. And I didn't want to leave the snug part of the house! And that's where that desk comes in. Then you can laptop away next to a wood fire. And I look forward to doing some letter writing there too! Although both work and house have recently rather got in the way of just that... 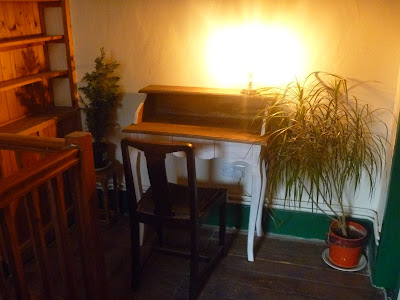