Every year I go to the beach with Lynda and a cohort of first year students. It tends to be a good day! Even though it's early to mid February we tend to have good weather. And we take the students to that beach because the sedimentology is spectacular. So what could go wrong? Not much! Last year it was a bit cold but some soup over lunch sorted us out. And this year the forecast was lovely!

I drove to work early, and jumped into the departmental Hilux, which had been filled with hardhats, trowels, and whatnot the night before, by the technicians. Off to the beach I went, to put big conspicuous labels on the sediment sections! I find driving an automatic a bit awkward but all went well. And I had hardly hammered a few pegs into the cliff face when I already got hot. What a day in the field this would be! 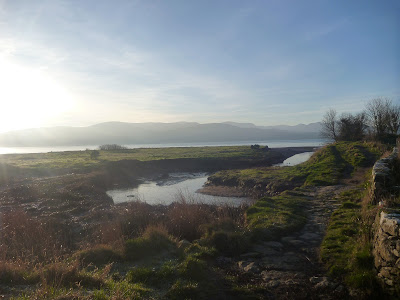 How I found the field in the morning

Lynda showed up right on time. She did her spiel, and then set the students on their way. And off they were! And we just loitered a bit. Would  someone have a question? They didn't. We asked them if it was all going well. Apparently it was! And it looked like they meant it. Good! And well, then we have to just sit in the sun and drink coffee. We can do that! We never had such an independent cohort before. Or such lovely weather. 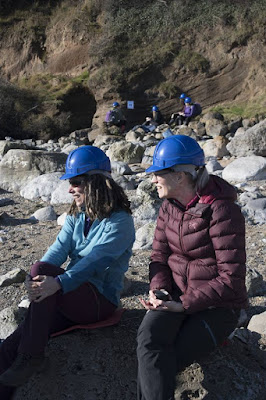 Relaxing on the beach with Lynda. Pic by David.

David popped by as he knew this would be a nice photo opp. And he regretted not to have brought the drone! Conditions were ideal! When we wrapped up the students were quite switched on. And then we went for lunch in Beaumaris, to the same place as last year. More hot soup! And then we did it again with the other half of the students. (There is another location nearby where other staff have them do some levelling, and sometimes some core drilling, and we swap student groups over during lunch). 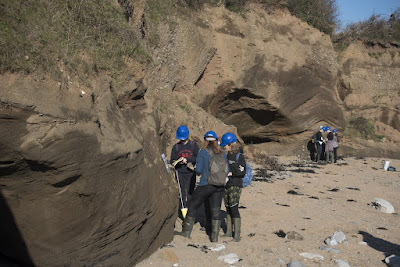 The second group was as good as the first. Great! And soon we'll have pretty much the same students on some trips to Red Wharf Bay and Cwm Idwal; that will probably be lovely too! Weather permitting...
Posted by Margot at 13:26