When I had managed to get a floor, and a sofa sitting on the floor, the living room was ready to be put to use! But that made it a bit conspicuous that the light was provided by a bare light bulb. That was not how I intended it to stay. So I bought a lampshade for it. But it wasn't just a lampshade; it was a lamp! So it came with everything up to a ceiling rose. That would suggest the thing to do is just to take off the ceiling rose and put the other one in its place (with all issues involved). But that's not as easy as it sounds! My ceiling lights are looped in. So it has nine wires coming out. The ceiling rose that came with the lamp only has space for three. So now what? Time to hit google!

This is what I found out: some people just combine wires and that way manage to fit them all into the limited space of a non-looped configuration. But one has better know what one is doing when choosing that option. And I don't!

Another option is to buy a connector box and that way add enough places to put your wires. But then you have to manage to fit the box inside the ceiling rose! That seems unlikely to actually work.

One can as well just forget about the new ceiling rose, and just cut off the wire before that and attach it to the old ceiling rose. That's easy! It just means you're stuck with the not-very-beautiful white plastic ceiling rose. This is what I decided to do in the living room. It's not perfect but it does the job!

What I might try to do in the kitchen is connect the wire of the new lamp to the old ceiling rose but fit the new one over the top. I guess it's big enough for it! Still; not a very hi-tech solution but I suppose it combines easy with pretty, and that's worth something... 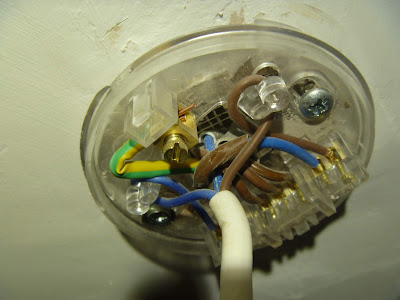 One of the looped-in ceiling roses
Posted by Margot at 07:14