Another Welsh book down

When I reviewed my last Welsh book I predicted the next one wouldn't take as long. And it didn't! I finished it. And it turned out to be quite the page-turner. In my world, at least.

The book just starts out with a bickering, middle-aged couple about to set off to the National Eisteddfod. Along the way they see another bickering, middle-aged couple they know, whose car seems to have broken down. They offer them a lift. General awkwardness ensues. You notice quite soon the man or the original couple is attracted to the woman of the other couple, while his wife swoons over that lady's societal status. And the other man tries to block out all the awkward conversation.

Once at the Eisteddfod, the bickering couple keep bickering. The lady wants to see and be seen, especially on stage, and the man is more keen on a pint with his mates from the choir, and singing Welsh evergreens with members from choirs all over the place.

So far interesting enough for me! What more do you need than the suspense of people trying to share a life while they want different things from it? Especially if it drags on for decades? But later it gets much more spectacular.

The initial couple, Dilys and Glyn, have two grown up children; a son and a daughter. And in the car on the way to the Eisteddfod you find out the other couple, Heulwen and Dan, had a child, but 25 years ago it was run over by a car when it was only a toddler. There were no witnesses and the police couldn't find a culprit. Can you guess who drove that car? I suppose you can. And then the book shifts to what the loss of a child, without knowing how exactly, did to the one couple; and what being eaten by suppressed guilt did to the one half of the other couple. And then the culprit comes clean. And get thrown into jail rather sharpish. And is joined there by his son. Being raised by a man whose head was with another child never did anyone much good. But the book leaves you there. You do get an idea if the couples will still be couples (and how) at the end of all this, but that is it. Enough for me!

It was a page-turner, even though it was written in South Welsh. I do long for a northern book next, but quality-wise I have no complaints! 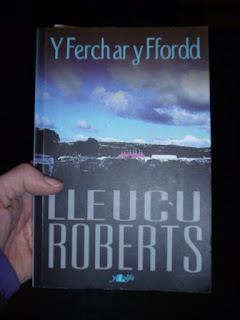