I thought I would have stoves early on ! The stove men were pretty much the first to get started. But they were the sort of types to do half a day of work, and then disappear for weeks, if not months. In April they pulled the old fireplaces out. In August they placed a lintel. In September I got them a piece of slate for the hearth. In November I started to despair when the work looked shoddy. But in the week before Christmas they came back and finished it off! The bloke had told me he's have a knee op on the Saturday before Christmas, so he wanted it done before then. I wanted that too! And one night that week I came home and saw two boxes and enormous amounts of pipe. The stoves! And the liners! They had been!

A day later I was at work when the Stove man texted me. Did I have my car key at home? They needed access to the roof, and my car was in the way! But I had it on me. I try to remember leaving it at home when I commute by bicycle but in ~50% of cases I forget. And I couldn't go and bring it! Would take too long on bike, and I had a meeting to attend. So I suggested he come get it. They had a car at their disposal. I gave the key to the SOS receptionist so I could just go to my meeting, and that worked.

When I came home that night the stoves were in position! I was warned not to use them immediately, as the seals had to set first. But the next day I should try them! And the next day was a Thursday so I was home too late, but on Friday I made the first little fire! I had moved my smallest comfy chair to the landing, and added a side table, so it had the basics. It was great to sit underneath the plastered ceiling and feel all snug! And it will get better with paint, curtains etc, but the beginning is there. May I spend many a snug hour there! 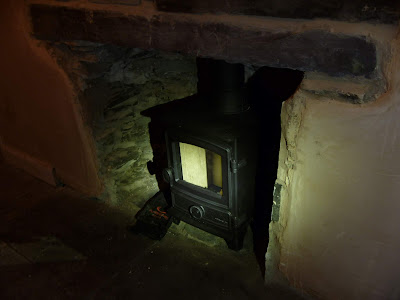 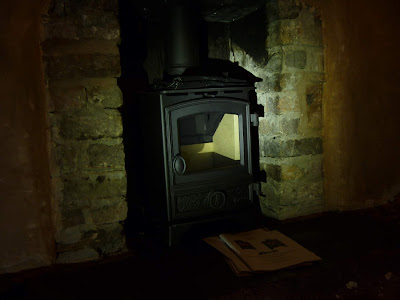