Back to long Thursday nights

I had done two ThursdayNighter trips in a row, which ended rather early. And I liked it! But it couldn't last. When a trip to Blaenau slate was announced I knew it was likely to last quite a while. I decided to go anyway; otherwise I knew I would probably be working all evening and that's not good. I did team up with Phil again; not only is that rather nice; it also means no unnecessary faffing.

We would be with only five; David, Paul and Chris appeared too. We first would look at a hole somewhere David had seen in passing. It was probably not much as otherwise we'd know about it, but well, curiosity is a strong force. We had a look! In rather bad weather. And it was a nice big wide tunnel but it only went straight ahead to a collapse. Oh well! Now we know. 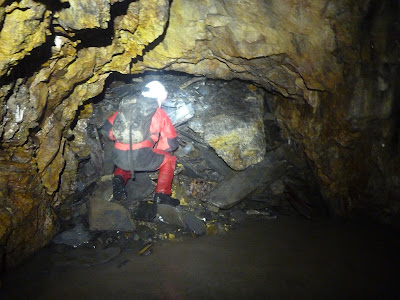 Then we went into a more substantial mine. I had been before but struggled a bit to remember it all. After some scampering we sat down for a cup of soup. Then we explored further! We saw nothing we hadn't seen before, and even missed things we had seen before, probably because we only went up one level from where we had got into the mine, and maybe the rest was yet another floor up. But these scree slopes can be a bit treacherous, and Chris had a slightly wonky knee, and that doesn't combine very well.

After we had done the vertical bits we explored into the same horizontal bits that had protracted the trip the previous time (when Mick had gone so cold he had left). I was getting impatient! It's a pretty mine but my bed is rather pretty too. Finally we were ready to head out. And through rather dubious weather we went back to the cars. It wasn't late by TN standards but surely by mine! Work is still rather relentless and I have to be in fine shape on Fridays to keep going. Oh well. I can always bail out altogether if I see it coming that a trip will take too long. But it was nice to have a night with the men. I had been feeling rather ostracised lately (I don't think my choosing the dig over the TN on a regular basis is appreciated, but all these guys are Brits so they won't tell you, they just turn passive-aggressive), and I had wondered if I should bail out completely and stop being a TN, but on reflection I had decided I had rather improve my relationship with them than break it off. And that's what I'm doing! And David said afterwards he had even considered my position in deciding if we would go all the way to the end of the mine. And he hadn't actually done anything with that consideration, but it was a start. We'll see how things develop! 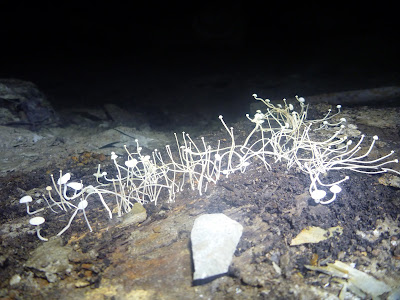 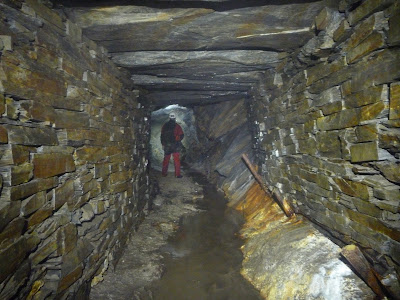 Sinker in a decorative tunnel 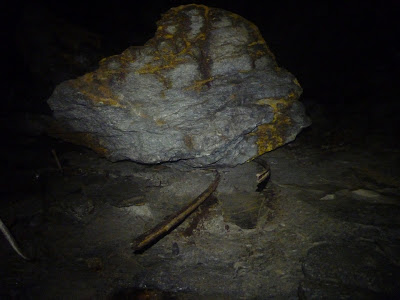