As I had never been employed to teach more than one term in a row before, I had never bothered to go to graduation. I didn't feel involved! They didn't feel like my students. But now I am permanent and I decided my time had come. especially since my own dissertation student would get his diploma. I signed up! And that means indicating what sort of academic robes you will need. And that is rather confusing if you're not British (or of some other robe-loving nationality).

I had always wondered what they'd make me wear. The idea is that you wear the robe of the university where you got your highest academic qualification. And in my case, that would evidently be the Vrije Universiteit. But Dutch universities don't let people other than professors wear robes. So I can't wear a robe from a UK university as I didn't graduate there, and I can't wear a robe from a Dutch university as I graduated robelessly there. So now what? And I still don't know.

I rocked up to the 'robe chamber' in good time to see what would happen. And they gave me a nice blue robe! I have no idea what university this represents. Or maybe they bought it from a theatre company that had a play with a fictional one. Nobody else knew either! And they dressed me. Seems to be standard that they fit it on you! I'm not used to that. I also got a very fetching hat, of which I soon saw it was a standard Bangor University Doctor's hat. The Doctores don't wear the same hats as the Bachelors or Masters, of course. One is a class society or one isn't! 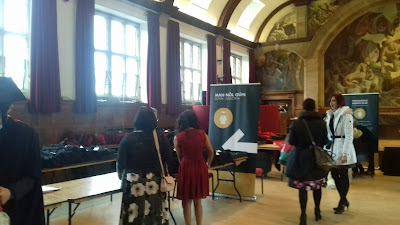 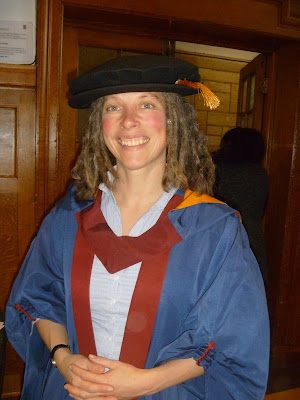 I then went to the Council Chamber; a very pompous room where all robed staff members were gathering. We were together with Psychology, Geography and Computer Science. There were only three of us; the Head of School, another professor in marine biology and me. And then people from the other schools.

After a while we were asked to line up two by two in the corridor, with the bedel (clearly the same word as the Dutch pedel) at the head. We were a funny bunch! People were commenting on each other's gaudy gowns, and were taking selfies, and being generally silly. I ended up lined up with Chris, from Psychology, whom I knew from Welsh class. And after an eternity we started walking. And suddenly this giggly bunch turned solemn, or at least on the outside. I did feel a bit in two minds about the whole thing; on the one hand, all this bombast (the hall we proceeded through was pretty bombastic too) would clearly help make the day feel special for the graduates. But it also felt rather aloof. A bit like it was all meant to make us feel better than the rest. Which I don't like!

We walked into the room. I couldn't see any of our SOS candidates. We sat down on the stage; I was just behind the pro-VC who was leading the ceremony. (The VC had just gone on 'early retirement' only a few days before.) The organ was blasting.

The ceremony went underway. A poem was recited, harp was played, and then the actual candidates lined up and got their diploma one by one. And soon my own student Pete was called forward! He had struggled to get to this point but he had made it.

Later the PhD students had their turn. And our own Catriona appeared! Looking happy. And then soon after it was over and we: candidates, relatives and staff, were lead outside. There one could have one's picture taken if one so wanted. A lot of mortarboard hats were thrown in the air! But the disadvantage of graduating in December, and being the last batch of the day, is that photography is not helped by the levels of natural light.

I found Pete, and then later Catriona, and could finally congratulate them. But it was cold outside! And people didn't linger. So after a while I went back inside to give the gown back, and then walked back to my car. And this is supposed to be the first time of many I will do this! As a rule, all staff should really be there. And this was a very small graduation, but in summer I should be back, and then there should be many of us; both staff and new graduates! 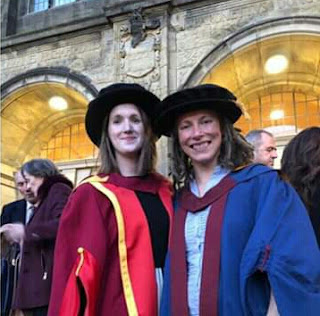 Catriona the new doctor and me!