It all started with an autoreply of my colleague Martin. Something was clearly amiss. But it could be anything, really. Then it became legal to invite people over to your garden for coffee or dinner or things like that. So I invited Martin and Fran (from up the hill) down for dinner; they had inaugurated loosening of restrictions in my garden before. And if there was something amiss, Martin would tell me. Unfortunately, he did. He answered that coming down wasn't really an option; Fran was ill so if I wanted to see them I would have to come up. Oh dear, so that was what that autoreply was about. But coming up was what I did. And she was a lot more ill than I had anticipated. It was sad to see! But she was making the most of it. And it was really good to see them.

Later, we who teach with Martin took over his teaching and admin roles, as he needed to look after Fran. She didn't get better. She had kidney cancer, and it was aggressive. And recently, she died.

A strong contingent from the School showed up at the crematorium. I was sad this was already the second time this year I had to go there. These are still Covid times, and only a limited number of people were allowed inside. Outside, there was a 30 person limit. I'm sure that more people would have shown up if these wouldn't have been such strange times. We were invited to come wearing something bright, and celebrate Fran's life rather than mourning her. That's hard, though! But we tried.

I didn't know her very well! I saw her every winter as she always organised a Christmas do at their place. And she and Martin had come over for dinner several times. We have also been visiting Suzie all together. But now that she suddenly was restricted in her movement, I came up more often. I was glad to have that opportunity!

And now? We will keep looking after Martin's tasks until he is ready to take them back. And we are trying to support him emotionally as best as we can. And the invitation to the cremation service suggested we don't bring flowers, but give a donation to support kidney cancer research. I hope all together we have raised a lot of money. Maybe that means someone else will be spared this fate! 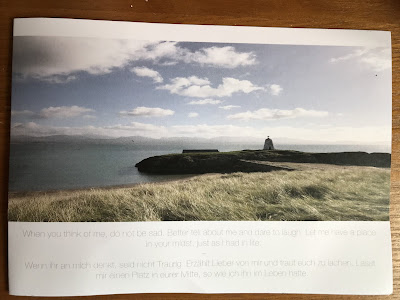