Yes I know, another viewing, it gets dull

I make sure I get alerts when houses of my preferred size and price category come onto the market in my search area. Generally these alerts don't make my hearts race. I am, when you think of it, quite specific about what I want! But you can't really feed all your wishes into Rightmove. But then one cottage came up. It looked lovely, it was at the bottom of the valley, and it was cheap. Worth seeing!

I went on Saturday morning. It was raining! The valley looked gloomy, but that's a look it wears well. I walked up the row of houses. They're not even on a street! There is a path in front of the houses, and a small one at the back, and that's it. Parking is on a layby nearby. I easily found the right house and knocked. A friendly-looking lady opened. She showed me around. It was such a snug little house! The ground floor was living room, kitchen and bathroom; all looked both really well-maintained but also still like the cottage it was. A nice balance between keeping the soul but also keeping it well!

Stairs led to a mezzanine level (high enough for me to stand, but for anyone considerably taller it wouldn't work) which doubled as a second bedroom. Only in the middle was it high enough to stand! And off that was a 'proper' bedroom; the same size, but with a door. A hobbit door! It was all extremely cute but also very small. You couldn't put a cupboard in either room! 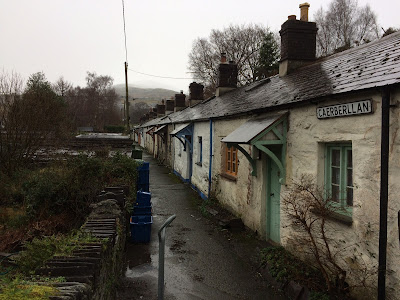 The lady also showed me the garden, with its wood storage, bike shed, tool shed (formerly the outdoor toilet) and the external office/ hobby room. The garden was gorgeous, even in January. And the extra room was clearly what a house like that needs! I was all impressed.

Back indoors the woman's husband appeared as well. He was full of enthusiasm; he had done it all up himself! All of it! And he had reason to be proud of himself. We chatted a bit until the next viewers appeared. They were more local; it was a couple of which the woman lived in Bethesda and the man in Waunfawr. They were also looking for their first home to buy! They were nice too. Some bilingual chat followed.

When the other viewers went outside to see the garden I left. I was all in love with the house! I'm sure I could pare down my belongings to make it fit. But I went home, had a coffee and a ponder, and slowly I came back to Earth. I figured I would need a house that's practical. Where you don't have to stay on top of things all the time because you have some room to spread out. I often come home late and tired! Often, my kitchen table is impeccable early on in the week, and entirely covered by stuff later on. And then in the weekend I have some time to sort it out again. In this house, I'm not sure you could have a kitchen table. And if so, you need to keep it tidy! So after a few hours of cooling down my love for the house on the river re-emerged on top. Time to do some number crunching!