I thought I would be digging! But then a message from Miles arrived. Stuff was not going as planned at work, and he thought he might not manage to come out digging. Later he confirmed that. A pity! But that meant I could come with the Thursdaynighters. And that probably meant being in bed considerably later, but it would be nice to see them again. We would go to some mine not too far from Cwm and have a Simon-lead wander!

I first went for a second viewing of my favourite house. Then I went on. I knew I would be a bit early at the gathering place but that was alright, I had my Welsh homework with me. But when I got there, a lot of the others were already there! No need for the homework.

Simon was the last to appear. We piled into two vehicles and drove on, closer to the entrance, where parking was tight. And there Simon left us! He was a bit under the weather and decided to go home. Oh dear. Oh well; we would go without him. We walked up in intermittent moonlight, but before we got underground it started raining quite forcefully. Oh dear.

We got in. Dry again! And we decided to do and find a steep passage the men had found earlier, and put a handline in. There are water hoses through the place, and we used one of those. It worked! Then we went on a bit of a scamper. Paul did his own thing and appeared now and then.

At some point we came to a flooded bit. David stuck a torch into the water. We could see a whole level below! That was nice. David and Ed teamed up to take a picture of it. Success! 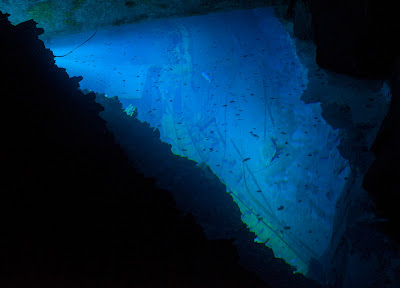 Then we went on. A lot of scampering followed. Finally we came out! A bit late for me, but not particularly late for the Thursdaynighters. The men wanted to go to the nearest takeaway, but as I had come from a viewing and was in my own car, I could skip that. I went home! And it had been nice to be out with the old gang again!