Music used to be tapes (in my world). Then it became CDs. I don't have my tapes, or the ways of playing them, anymore. I still do have my CDs. I do intend to upload them all onto iTunes and do away with them. They don't need to take physical space! And I figured I should play my music in my house in digital format. Some two years ago I had bought a big iPod so I could put all my music on that. It worked for a while! But then the iPod packed in.

I also have an iPhone. Why not use that? Gazillions of people use their phone as their stereo. But I don't want to do that. I want to plug the carrier of music into my stereo, and leave it there. I can then use my phone for phone stuff. I suppose modern people have wireless speakers and then they can do both at the same time, but I don't. Maybe some day. Not now!

Having an iPhone also means people assume you want a new model every five minutes. When my contract was such I was entitled to a new model I didn't want one. My old one still worked! Then I got a phone call: I could get a new phone, or get a cheaper subscription. Well, why would I refuse a cheaper subscription? And they said that with the cheaper subscription came a Samsung phone. Eh, OK. Why not? It gathered dust for a few weeks until I had a brainwave. A Samsung phone is a carrier of music as well! And it's not Apple so it doesn't carry iTunes, but I'm sure I can sort something. I took the easy route and went for a trial Google Play Music subscription.

It worked! Soon Tori Amos was singing through my living room. I will have to download some music for if I don't trust internet to work, and I should make some playlists and such, but that's something you can do in a lost five minutes somewhere. I think I'll be fine! I haven't played much music in my house for a fair while, and sometimes I do want to. I'm back on track! 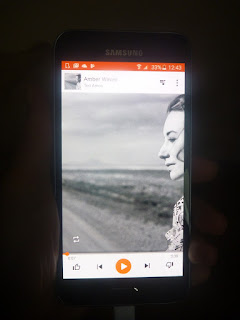