The first week was over and routine had set in. All was going fairly smoothly! The tides were, as I was concerned, perfect. I could go out at 7AM every morning. Whenever low tide was far away from 7AM (at the very beginning and very end of the trip) it was also quite low. That was great! If low tide is, say, at 3AM and 3PM things can get hard, as at 3AM it's dark (and also unpleasantrly early) and if you have a total duration of your assignment of

11 hours and you HAVE to do the bit in the field first, you can't really start at 3PM, as you'd be at it until 2AM.

One thing that didn't get better with time was the weather. It got really, really hot! For me it was bearable as I am only in the field until 9AM at the latest, and that just doesn't get as bad as the mid-afternoon, and the rest of the day I am in a shady lab. The chalet my lab was in stayed relatively cool. The other buildings became saunas! Everybody struggled to sleep in the heat. The mid-day activities outside became unpleasantly hot. But what can you do!

I also didn't run an awful lot; I didn't want to run before going into the field as that would mean getting up even earlier. I ran one during lunch break, but I tend to only have an hour, and that also includes tidying up, having a shower and having lunch. Not much worth it! And if I had students finishing early it was still very, very hot then. I did manage an acceptable number of runs, though. I even found a route that avoids the main road! Unfortunately, this route included a part of the coastal path nobody ever seems to use, and it was very overgrown with plants that gave me nasty swollen scatches. Not nice! After a few attemtps of stomping a path through I gave up and just used the little stretch of the main road to get to the country roads anyway. Less hostile vegetation there, and fewer biting insects too! 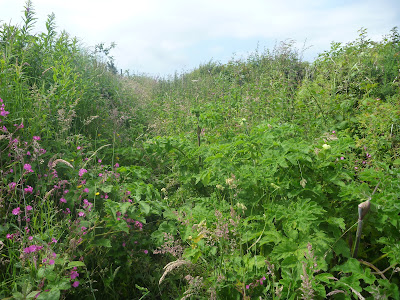 On Monday we went into the field to drill a core. It was way too hot, but we did it anyway! We split the students in three groups; one doing gepophysics to tie in with the core, one group actually coring, and one group describing the core sections. The core came out splendidly; that made up for the discomfort. Through the day, though, the students got increasingly boiled, and their enthusiasm dropped off a bit. The last group to decribe core sections got the least interesting bits of the core; they struggled a bit. But we got it done! 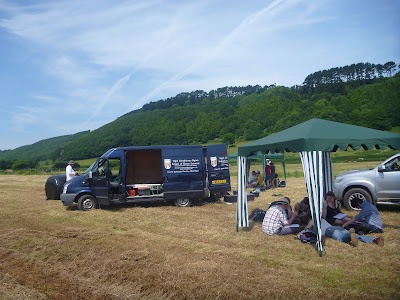 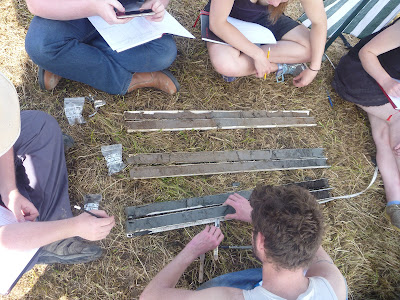 After dinner on the coring day, David suggested we go and retrieve a time lapse camera he had put up at the estuary mouth. I thought it would be a good opportunity to see something of the area outside the small bit where I take the students every day. I was tired, but it didn't sound like a long walk to get that camera. How naive I was. With David everything turns late. We retrieved the camera from an amazing vantage point, and from there we continued to the beach. David wanted to fly his drone over two areas. But time was ticking! And we had to walk all the way back to the car. I suggested I leave him, get the car, drive to close where he was flying his drone, and pick him back up. We did that! And got home at 10PM. Bedtime already! But if I ever end up in charge of this trip, I will try to  bring the students to that spot on the first day. It provides such a lovely view!

The mouth of the estuary

After the weekend the staff numbers dropped off; Colin (who had only done the first Monday and then the weekend) left, Jaco left, the geophysicists left, Tasha had already left; only two members of academic staff were left. The rest comprised three technicians, one photographer, and one teaching assistant. No problem, but a bit quiet. As I have such long hours, and the technicians too, it was Martin (the other academic), David (the photographer) and Maxine (the teaching assistant) who did all the cooking from then on. But they didn't seem to mind!

And then the final day came. The students were a bit cranky by then (well, two of my five were) and it was the hardest day to teach; it was still blazing hot and if you have a few students who are fed up they risk infecting the others. But we got through it! Maxine and I packed up the lab in no time. I even had time for a small run afterwards.

The next day we packed up all the other chalets, and had a look at how the students were faring. We had told them we would leave at 10AM, and lo and behold, they were all ready at that time! I think that might have been a first.

I think we all pulled it off! There were no injuries, there was no serious damage to anything and nothing got lost, and most field days went ahead as planned (there was one case of an unexpectedly deep river channel, but we successfully dealt with that). All the students did my part of the trip successfully. All staff agreed that this had been a good cohort. I think we can call it a success! That's one weight off my shoulders! 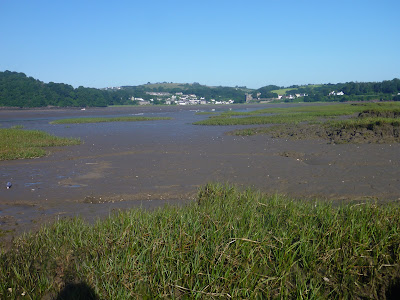 Laugharne seen from the mudflat
Posted by Margot at 08:26