It is already one and a half years ago I mentioned the university wasn't doing very well financially. It still isn't. It's actually worse now! All Welsh universities seem to be struggling it seems. Some English ones are, too. But the state of Bangor University, of course, is most relevant to me. For the last 1.5 years it hasn't been the case that nobody at all has been hired; we have 1.5 new lecturers in marine biology, and a new data librarian, and maybe some people in posts I don't know much about.  And there's me. That isn't much, though, especially if you think of the number of people who have either retired or chosen to go elsewhere in that period. People are gloomy and prospects are bad! We regularly get emails about that the situation is dire and that we need to save money. We have meetings within SOS as well about it. The media are buzzing with rumours on forced redundancies. But what is really going on?

On Thursday I went to a meeting organised by the three main unions (UCU, Unison, Unite) about the situation. There clearly had been some discussing going on between unions and university management. The unions wanted a guarantee on no forced redundancies, and initially the university seemed to have been willing to give that, but had withdrawn it. So now what? The deputy vice-chancellor in charge of finances would be there to give a presentation, and take some questions. Not all questions; one of the biggest lecture halls the university has (if not the biggest) was packed. People were sitting in the corridors and standing on the sides. There were more questions than he could possibly answer. But he mentioned that so far the university had been putting out fires; what they wanted to do now is make such big savings they would then actually have money to invest in the university again. How? He wasn't very clear about that.

After a while he left. Then the union reps took over. They explained there had not been any specific proposals by the university on how exactly to save that money, but a lot of suggestions had been made. Some savings were no-brainers; the university seems to spend a fortune on conference attendance and business class travel. As researchers always go to conferences on their project budget, one assumes these posts must benefit higher management. They weren't popular with the audience in that lecture hall!

Cutting conference attendance and business-class travel won't be anywhere near enough, though, so what else to do? Fire people? Have a pay cut all over university? Ask everyone to take every 10th day off? And then it gets complicated.

Firing people is not a popular option, of course. But I can imagine it shouldn't be entirely ruled out. I have worked in places where there were people without whom the university would run better than with them. It frustrated me they weren't booted out; I can't now suddenly be entirely against booting people out.

The pay cut would be OK with me. It would have to leave out the lower earners. We academics can generally do with less money, but I'm not sure if the same holds for the cleaners and security officers and whatnot. And if we get a pay cut we want the big earners to get one too! Some people, however, are worried about high-flying academics then going elsewhere and the level of research dropping off. Nobody wants that.

The 10th day off option would be a bit weird because the work load wouldn't change. I suppose support staff who only work the hours they are paid for would get less work done, and the academics would probably keep working as hard as before but just get paid less. And I think the academics get a lot more than the support staff, so this would be an egalitarian option, but it would still be a bit twisted. What would be the impact of support staff doing 10% less work? Will the academics resent the even more blatant disconnect between the hours worked and the remuneration? And will the best people leave?

What will happen? I don't know. I'll be on fieldwork soon. I suppose I can still get my voice heard as my union (UCU) will undoubtedly keep me informed, and let me know if there will be a vote on something. All I can say now is: watch this space! I hope somehow this can get solved without too much drama. Not likely, but let's keep the faith! 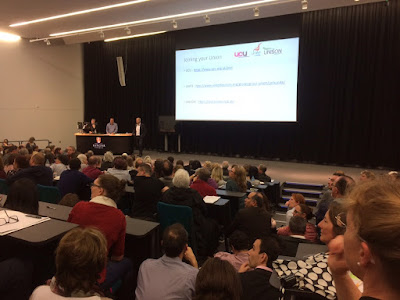