The fieldwork would start easy for me. On the first day I only had to drive a rental car down. The next day Colin, the man who had started this fieldwork, and who had based it on the research he had done here for his PhD some fifty years ago, would lead a trip through the area. He brought us all to the river quite far upstream, so outside the reach of the tides. He then took us to a headland at Pendine from which we could see the back-barrier system, which features importantly in the trip, pretty much in its entirety. Not all students enjoyed the steep walk up, but hey, they can't have it all. 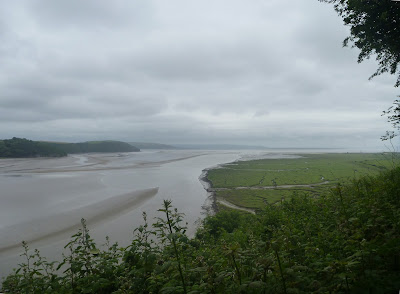 The marsh on the first day in the field; notice the weather is still nice and cool

We also went to Laugharne itself, to look at the estuary, and to scamper through the tidal creeks. I don't really think it's scientifically necessary to do so, but it makes it clear which students have the tendency to get stuck in the mud. There is always at least one! And indeed, this time too. And it's important to know that; the students survey the whole estuary, and this way they know which students should not be asked to do the extra muddy transects. It was great fun!

Only the third day things got more complicated. Students went off to do five different things, so they all needed to know what time to gather where, what they had to bring, and we had to sort out the vehicles for driving them all around. And I had a full day in the field and the lab. I only had three students. so it wasn't overly busy, but it did take them some 11 hours to do the entire day. They were a nice bunch though, and all worked out. The day after I had five; that was quite a day. The day after that I had none and could just work on a manuscript. 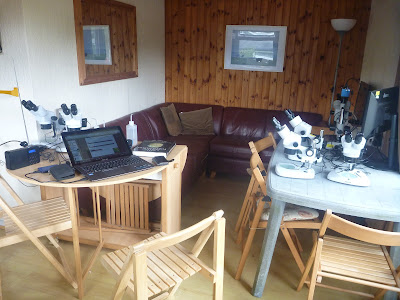 That first week we also had the company of one of our PhD students.We were short of hands in several ways, so we needed someone versatile. A renaissance woman, as Colin put it. And we have one! By the name of Tasha. She could only attend the first week so we took what we could get. She could already drive any of the vehicles we have, and she could help the students with the MATLAB work they do, and we would teach her to survey on one of the first days. And it worked well!

She had not only brought her versatility but also her dogs. They were a lovely addition to the fieldtrip! They are very cute and well-behaved, so everyone loved them, and they didn't get in the way. They went on Colin's trip; they tried to make pretty much everyone throw sticks for them. Tasha told everyone to not give in as they are silent as long as no sticks are thrown; when there are, however, they don't stop barking, and that would get in the way of the teaching. But it was cute to see them try! 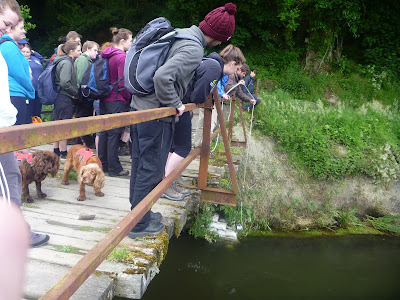 One of the dogs once escaped the lab when the cooking smells from the main chalet were getting too tempting; he legged it straight to its kitchen. Oh dear! And the other one once decided she wasn't getting enough attention, and forced herself onto the laps of the people who were clearly the busiest checking taxonomy. Not very practical, but very sweet!

We now have to do without both Tasha and the dogs. It's not quite the same but we'll manage! 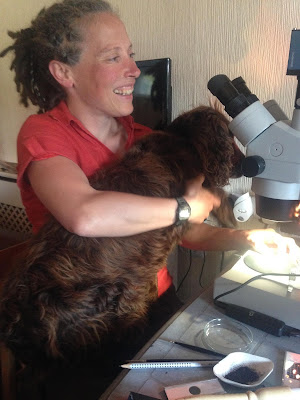 Sprocket and the microscope (this one has a camera mounted; hence me not looking through the ocular)
Posted by Margot at 17:38