Visit by the Quiet American

Every year an American friend of Phil's comes over to come underground with us. He is known as Neil, the Quiet American, as he's a rather introvert character. I couldn't find his previous visit on this blog but I've been underground with him every year. This year Phil suggested some venues; one was Fron Boeth. This is a three-pitch through trip and I had only done two of these (due to the top pitch not being fully rigged and us not bringing the necessities to sort that). I voted for it; it's time I get to do the full trip!


We gathered in Croesor. That included not only Neil but also Phil's wife Julie and their dog, and a dog they were dog-sitting. Nice! Our plan was to first have a coffee in the local cafe, but it was closed; after some wavering we decided to go to Llanfrothen to get coffee there. I had two. That was nice! Then we went to where we normally park up for the mines we had in mind. This time we'd do two; there's also Pant Mawr in the same valley. Simon suggested we could go along the southeastern edge of the valley rather than stomp straight through its middle - which we generally do - and I thought that was a good idea. We'd see something new, and in the valley we tend to end up stomping through dense vegetation and swamps and whatnot. A path would be nice! And we'd see something new.

We started along the path. It soon vanished, and guess what? We were stomping through swamp. Oh well. Millie the Dog kept our spirits up. She loves running through swamps and jumping into ditches and snorting at vegetation. 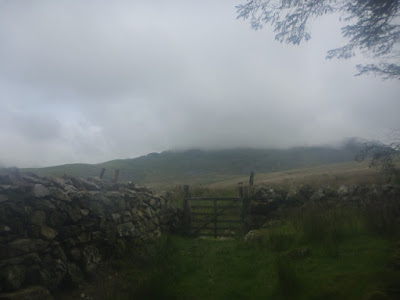 In the beginning there was a path. All pics taken with the recently repaired camera by the way; the pics are a bit foggier than reality was

We hoped we could walk over the ridge (where we found a path again; yay!) to the desired elevation and then traverse to the mine, but the traverse looked uninviting and we ended up going over the actual top of Moelwyn Bach. That was a bit of a slog on wellies, in the heat and midges, and carrying ropes and SRT kit, but hey ho. We managed to lose Phil and his entourage somewhere along the way, but they didn't want to go underground anyway. 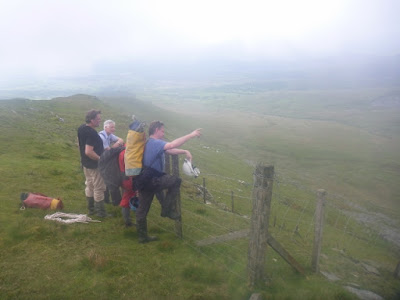 A fenced area tends to mean a mine entrance; and thus an excuse to stand still and have a breather 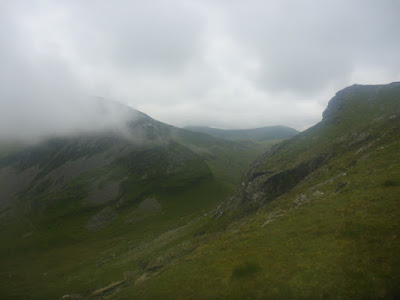 Moelwyn Mawr on the left, Moelwyn Bach on the right, and Bwlch Stwlan (the pass) in the middle 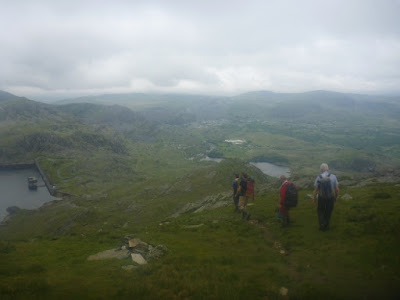 Approaching Stwlan Reservoir again; this time from the other side 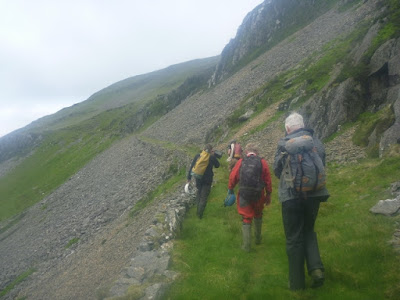 On the old tram line

We looked at the southernmost adits of Pant Mawr and didn't like the look of them. We moved further north and found one David investigated; he came back wet up to the thighs but with news that it didn't go. A while later we found the one we had been looking for; we all got rather wet but we got in. We found a mine with two levels as far as we could see, some roofing shafts going up, and a large chamber. It clearly wasn't visited very often! There were hobnailed bootprints all over the place. 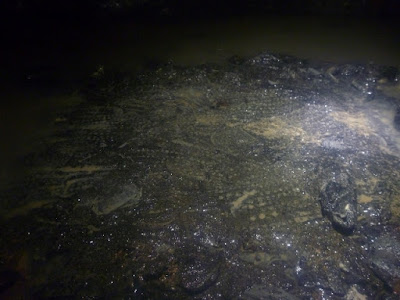 David tried coming out at the lower level but that involved water deep enough to require a change of undies. He went for it but we other ones went back the way we had come, and came out with dry undies. Excellent. We had a little sandwich in the sun and then went on to Fron Boeth. We soon found it. We skipped the top pitch (no! Not again!) as it again would involve sacrificing gear and the men didn't feel like that. And I was getting tired so I didn't insist.

The second pitch should be a pull-through but you can't rig it as such without, guess what, sacrificing some gear. And Neil didn't like the look of the pitch so David rigged it as a normal Y-hang, and Neil and Simon threw the rope after us and went around the outside themselves.

We had some trouble with the second pitch, which now had to be a pull-through, but in which the rope twisted itself which made it difficult to pull down. Was that because the rope was rather new? Luckily we had Don; he solved it. We could go down! We checked the entire lower level (which is small) and then went out. We took our caving stuff off and set off back to the cars via a more sensible route.

Don went home but the rest of us decided to go for dinner. The Brondanw Arms (aka The Ring; the nearest pub) had stopped serving food but we found refuge in the Golden Fleece in Tremadog. The food was good! The "volcano pizza" left David in tears but he ate the entire thing. Then it was time to go home! The next Neil trip will be on Tuesday night. A busy week!
Posted by Margot at 09:26