With Neil the Quiet American in the country and it being half term, the week went a bit strange. Monday was a Bank Holiday so it was a day off, and there was no climbing either. Climbing moved to Wednesday so I moved Welsh Practice to Monday, and on Tuesday Phil suggested another underground trip. As it was half term there was no Welsh class so I joined. Not many of us could!

We met at the Lakeside Cafe. I was a few minutes late and saw Neil's and Don's car already parked, with the men in them. I thought that was strange I suggested we all sit in one car; that's nicer! Then it turned out they hadn't checked whether the cafe was open. A deadly sin! I Immediately went to check. It was! We went in. It was raining, we had to wait for Phil, and the best way of doing that is with a hot beverage.

Phil appeared and had a beverage too. When he had finished it we manned up and got ready for the trip. It would be a small one! It's a short walk and a small mine. I set off in civilian clothes; it was too warm for a caving suit. I did end up with wet feet but hey ho. The midges were out, but as long as you kept walking it wasn't too bad. 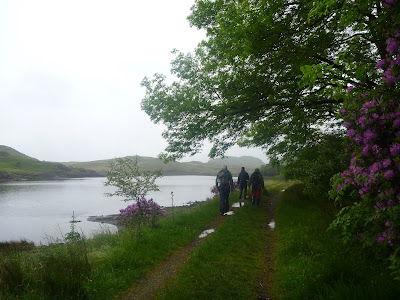 The scenic walk up

When we got to the entrance I put my suit on over my civilian clothes, and added boots, helmet and gloves. And was keen to dive head-first into the entrance! Bloody midges. It was nice to get inside. 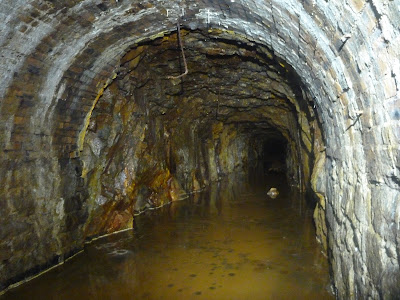 The entrance
The mine is a bit odd; it mainly is just an adit. It does have nice dripstone formations and funny ochre shapes though. I went to the end with Don; Phil and Neil were looking at every crack in the rock (or something) and didn't move very fast. I sat down with tea and a sandwich. 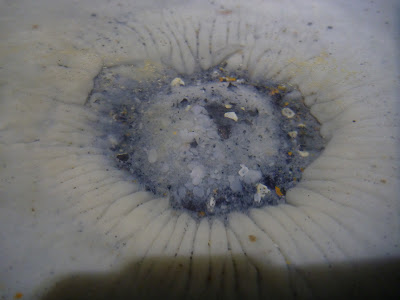 Funny shapes in the ochrous deposits 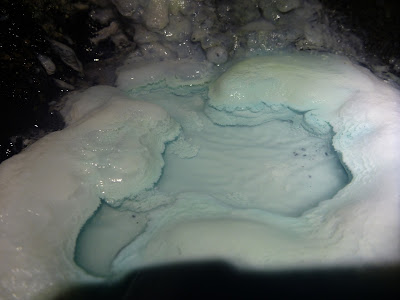 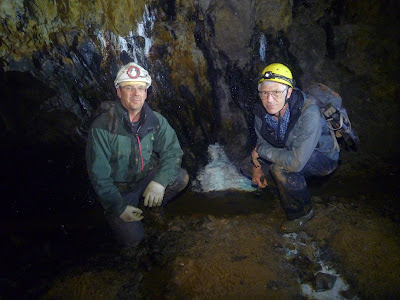 Phil and Neil with the pretty dripstones

When I got out I was immediately attacked again. I had to help Don help Neil out of the entrance, though. When he was out I changed back. When we got back to the cars Phil kept talking; I wanted to get away as I don't enjoy being eaten. I said goodbye and left. Phil must have kept talking for a while as he only overtook me at Llyn Ogwen! And he drives considerably faster than I do.
Posted by Margot at 19:04