One Welsh book down!

It took a while but I got there! A year ago, I mentioned I was already halfway in a Welsh book. It took me a year to read the other half. I took that book with me to many places! It's been on a research cruise, in Greenland, and to the Netherlands more than once. Reading in Welsh isn't necessarily fast (although a novel in Welsh went rather swift) but this book was rather dry. I decided to push on, though. The topic was interesting, but it wasn't an unusually well-written book! Unfortunately. I know it also exists in English so I could have just switched, but I didn't.

The book is about a concentration camp in Wales where a lot of the people involved in the Easter Rising were locked up. They didn't have an awful lot to do in there, so they passed the time pretty much doing what would turn out to be starting the IRA. It's called "Y Pair Dadeni"; this means "the cauldron of rebirth" or, as I have it heard more colloquially being referred to, the Magic Cauldron. In this case, the rebirth was that of the Irish nationalist movement. And the Magic Cauldron is a theme from Welsh mythology. 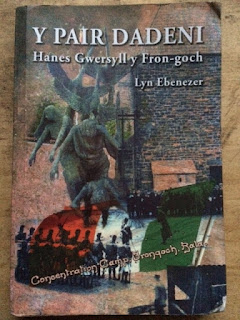 So now what? I didn't have to think long about that; our Welsh course has themed chapters, and we had recently done one on Welsh literature. And there seems to be one book that is generally known as the best one ever written in Welsh: Un nos ola leuad (one moonlit night). Well, let's try that one then! No idea whatsoever what it's about (the title leaves a fair amount to the imagination) but I'll find out. Just that other people like it doesn't mean I will, but I'm sure it will be more pleasing than the previous one! 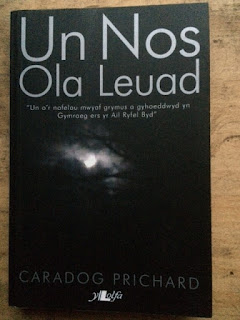