There is such a thing as the College of Natural Sciences Women's Network, and I am part of it, but I'm clearly not advertising it enough because when I looked for an earlier mention of this honourable body on this blog I couldn't find any. Oh dear! We've been going for years.

Why is there such a network, one may ask. Well! Natural sciences are still a rather male-dominated world. To use the School of Ocean Sciences as an example: our Dean (OK, he is CNS-wide) is a man, the Head of School is a man, we have ten professors and only one of them is a woman. Of the non-professoral academic staff the ratio is not so extreme; these are 12 men and 9 women. Men, clearly, dominate the school. And some ladies in the School of Environment, Natural Resources and Geography decided it was time to have some occasions where women could get together and do stuff once in a while without all these men. So they founded the CNS Women's network. And they had organised this session. Its theme was: confidence building. I went! 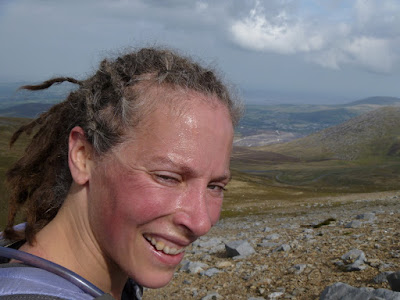 We discussed what confidence is. Not easy to pin down! Having faith in your abilities? Or being comfortable in your weaknesses? Or both, depending on circumstance? And regarding one's weaknesses: that's a pic of me running a race in which I would come last. I think doing that knowing I would be shit at it was a good thing (apologies to the organisation for making them wait).

Do I need confidence? Yes. I have it already in some aspects; I am not nervous in front of a big lecture hall full of students. I don't mind speaking up in a meeting even if I know people will object to what I say. But I can still do with confidence in other matters; I am, for instance, nervous about doing complex things for the first time. I am nervous if I have to lead a field trip for the first time. I may (or may not) be confident about the science, but then there's the organisation and the logistics. What do we need? When do we need it? Where is it? How do we get there? Do all students read the instructions? What do you do with students who don't show up? If some students take a lot longer than others, when do you cut them off and decide they've done enough? That sort of stuff.

Another thing I struggle with is asking for time from other people. All academics are overworked, and the last thing any of them needs is me barging into their office and wanting their time. I do manage on a small scale; I could not have done my MATLAB exercise without asking for help (and getting it) from colleagues. But if it gets bigger I struggle. If you have an approach like that you might have issues getting research proposals together, for instance.

The session could not solve that, of course. I suppose the use of the session was making you think a bit. If you do, you tend to know what you should do. Just facing your fears slowly but steadily tends to be the answer. You don't need to go to a session for that, but if you don't, you might not really get around to thinking of doing some self-imposed exposure therapy. And it was nice to hear the stories of the other women.

I also enjoyed some of the theoretical underpinning of the woman (from HR) who lead the session. She had read up on the subject, and confirmed that there is indeed strong evidence that women are less confident than men. In the west, that is. In some cultures, the genders are so segregated that women only compare themselves to other women, and not to the entire population. And if you compare yourself with the entire population you end up comparing yourself to men. Who dominate politics, and science, and business, and whatnot. Where if Tom deMoulin wins the Giro d'Italia all the Dutch are ecstatic as he was the first Dutch person to do so (and it even says that on the Wikipedia page). Except that Dutch women have done so multiple times. (Insert Andy Murray and Wimbledon for an UK audience here.) And where ignorant male bullies win elections over capable women. Where students will accept a low grade given by an expert female only if it is confirmed by a male colleague who is an expert in something completely different. Where you run a race with more than 1000 runners who all get a shirt at the end, but they only have male cut. Where men still think it's OK to comment something along the lines of "I'll have some of that" when a woman walks past, and then think they defend themselves by saying "I only looked, I didn't touch!". Oh so you didn't commit a crime! That's OK then. Go and treat your fellow citizens like consumer goods all you want then. Oh dear. I'm getting carried away. This sort of stuff tends to do that.

Anyway. I went to that session and it was good. And how am I going to get that confidence? Well, I suppose being nervous about being responsible for big things you don't know much about is perfectly sensible. Maybe I should work on contacting people if I think that would be a good idea. What's the worst that can happen? They may say "sorry I have no time for this". Fair enough. I have to organise a series of seminars next year; that will be a good opportunity to practice! Let's see how many people I think are the bee's knees I can lure to Bangor...


ps all examples given here actually happened.
Posted by Margot at 16:27